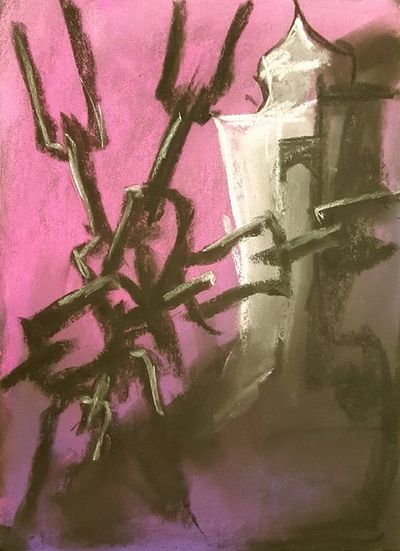 Chains allegedly symbolizes the way that desire can become a trap.

Known as the Prince of the Argent Tontine, Callidus is most concerned with greed.

He is also called Sovereign-Lord of the City of Chains, a fanciful reference to the many deals and agreements he has made - as far as anyone knows he does not rule an actual city at all (despite rumours that he owns a portable citadel of iron and white basalt), preferring to remain a peripatetic instigator.

Callidus is a potent horned male with fine clothing. He is rarely encountered without a ledger or two, and never without the ability to create a contract.

He is usually accompanied by one or more of his secretaries - clever eternals in their own right who serve as his proxies and advisors. His massive appointment tome, the Iron Ledger, is kept by his meticulous heralds, who often appear as Freeborn cambions. Scrupulous and precise, Callidus sometimes sends heralds to offer bargains, or to follow-up on bargains made by others.

Callidus seeks to control everything through greed and desire. He exemplifies the idea that everyone wants something, and that by identifying their desires and being able to supply their needs, an individual can wield immense power. He also sees greed itself as the primary motivating force of living things, and supports and extols philosophies that highlight the influence of avarice and wealth.

While all Autumn eternals enjoy bargains, Callidus revels in them. He invariably creates a contract to cover any agreement he makes, and is the Autumn eternal most likely to invoke the Lictors to witness an important agreement. He invariably sticks to the letter of a contract, and some bargainers have met unfortunate fates due to not reading their agreement carefully enough. He can and has been bested in his bargains, and tales are told of heroes who dealt with the Silver Prince and came away rich, but his nature is such that a bargain that seems fair at first often grows more constrictive and dangerous as time goes by.... Callidus is quite pragmatic; he does not hold those who best him in contempt; he often tries to arrange an audience with them to discuss how they bested his contract, so that he can avoid the same mistakes another time. However, he is absolutely ruthless in hunting down anyone who breaks a bargain they have made with him.

While the massive amount of business engaged in by his army of scribes and secretaries would necessitate a palace of bureaucracy, instead all such paperwork is contained within the single Iron Ledger. The Ledger itself seems to operate on much the same principles as Callidus himself; simply by inserting his hand he seems to be able to pull out the document he is seeking.

Callidus must surely have an enormous collection of religious items, after centuries of buying such things from mortals, but where he keeps this vault is unknown. Fanciful tales claim that his immense wealth is stored by the Lictors, while others say that his Ledger can be "unfolded" to reveal a massive citadel of iron and white basalt that is his true domain.

While undoubtedly the equal in power of any of the rulers of the cities of Autumn, Callidus does not compete with them directly. Rather he acts as a broker for such beings, supplying their desires, acting as a notary and occasionally offering advice. Beings of such scope are too clever to deal with Callidus lightly, and only utilise his services when completely necessary. However, by long standing tradition Callidus is generally free to meet and bargain with any of their underlings, and thus passes across the labyrinthine paths of the Autumn realm unmolested.

Traditionally Callidus uses a Fleur-de-Lys type symbol as his seal, the three points symbolising the three Secretaries that he is currently using. Competition to remain at such a level is fierce, and his underlings constantly scheme to advance themselves.

The Prince of the Argent Tontine is fascinated with mortal religions. Callidus understands that faith is a powerful force, but one that is extremely ephemeral. One of his personal desires is to understand the value of faith, and the need it satisfies in the faithful, the better to manipulate others using their beliefs. An extremely patient eternal, he has been studying mortal religion for centuries, and often appears to tempt or bargain mortals away from their faith. Over this time he has amassed a great trove of lore on faith, and is said to possess several relics of the Imperial religion. His knowledge is best described as being 'technical' - he understands the politics of religion much better than he does individual faith.

Callidus is associated with both the rune Lann, and the rune Queros.

Bargains themselves fascinate Callidus, and he has several supernatural powers relating to creating and sealing them. He is known to possess many favours with other eternals, and to draw on them to fulfil bargains on his behalf. He is particularly keen of getting bargainers into his debt, and reinforcing his ability to call those debts due with curses. His bargains are more likely to involve the bargainer doing or not doing something in return for a favour or service - it is less likely to involve mere payment with materials.

His most potent abilities deal with the manipulation of desire and greed, and guiding serendipity to increase wealth. He also possesses several abilities that deal with bonds, especially bonded items, and is said to be able to locate highly desired items in the material world with sufficient inducement, especially those that are unique or exotic.

Some priests are interested in the religious artefacts Callidus has gathered, but they tend to be very leery about entering into a bargain with the eternal. Callidus appears to take particular delight in challenging and testing priests and other strongly religious characters who come to deal with him.

The Secretaries of the Argent Tontine

Unlike eternals such as Basileus Flint, Callidus runs a tight ship. The eternals who serve him do so out of a belief in his creed and a desire to increase their own wealth and service their own needs. There are few stories of incidents where one of them attempts to overthrow or betray Callidus, and many scholars theorise that all the eternals of the Argent Tontine are bound with oaths and contracts that keep them loyal.

The Secretaries - literally secret keepers - who serve Callidus are lesser eternals rather than heralds. They sometimes deal with the Empire directly, either pursuing their own agenda or operating as proxies for Callidus. They may arrange audiences in the Hall of Worlds, or send heralds on their own business. The three best known of Callidus' secretaries, who have dealt with the Empire in the past, are Numis, Malleas and Zand.

A female eternal who is fascinated by the role of coins and hard currency in agreements. She occasionally likes to take credit for inventing the idea of currency, or spreading it across the mortal realm - it is not clear if she expects this claim to be taken literally. She is the longest serving of Callidus' secretaries and is acknowledged as the entity who designed the iron coins used in many parts of the Autumn realm.

A male eternal who favours gamblers and wagerers. He is known to send heralds to arrange wagers on important events, and often creates bargains that involve gambles or risky ventures - he is also known to lend money but demand extortionate rates of interest for the repayment of the debt with dire consequences for forfeiture. He has been Callidus' secretary for the shortest time (barely longer than a century or so) and is known to favour both gaudy displays of wealth and allowing others to make a pitch as to why he should invest some of it in them. He often seems to lose out on deals, but never seems to grow any less wealthy.

A lawyer, and usually dresses in the style of a wealthy Freeborn scrivener, but in colours few Freeborn would choose. His robes and tagelmust are the dull metallic colours of well-handled coinage, and the deep black of oxidised silver. Scrupulous and precise, he is fascinated by the way contracts are created and used to regulate behaviour. He effects the air of a stereotypical bureaucrat – obsequious to Callidus, polite to those he wants something from, and relatively rude to those he has no use for. He is the eternal most frequently sent forth to make deals with mortals at present, but this is subject to change at Callidus' whim.

One or more of the secretaries tends to attend Callidus when he deals with mortals, and may make their own bargains at the same time.