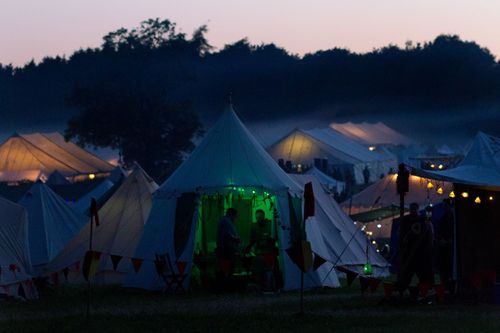 The ritual creates an enchanted aura that encourages restful indulgence.

This ritual enchants an area with a potent aura. Anyone who enters the area becomes aware of (and subject to) the aura, and experiences a powerful roleplaying effect: they feel relaxed, happy and perhaps even a little drugged; pressing concerns are easy to set aside for later. They feel an urge to indulge themselves, and luxuriate in pleasurable sensations. It is easy to fall asleep in this area, and anyone who does is likely to experience vivid, pleasant dreams and awaken refreshed.

A character who engages in at least fifteen minutes of relaxed roleplaying in this location aura recovers all lost personal mana. There is no effect if the character is on a battlefield or in a similar stressful environment. If the character makes or suffers an attack during this time, or spends any personal mana, then the fifteen minutes is interrupted and must be begun again from scratch. This magic is not sufficient to allow recovery of personal mana to any character who is under an effect that prevents recovery of mana overnight - most obviously, it will not help someone who is under the effect of Dreamscape of the Endless Hunt or similar curses.

This ritual creates an enchanted aura that evokes feelings of relaxation and restful indulgence, similar to those that surround some eternals of the Night realm. It is commonly used to prepare areas that encourage relaxation and recreation. Some Freeborn parador, for example, have a location specifically set aside for invoking this ritual, where visitors relax, eat, drink and chat languidly. Many naga find these enchanted areas especially soothing, and enjoy holding long indulgent feasts in them, or simply engaging in lazy gossip while sipping cool drinks.

The Chamber of Delights can be made permanent with ilium but this is almost always done inside a building rather than in a tent or other fragile structure - simply because it is too easy to cause the enchantment to collapse by shifting the boundaries of the aura. Magicians theorize that an ilium-infused enchantment such as this would be especially durable. They speculate that in addition to the usual resistance to replacing such an enchantment with an enchantment not also infused with ilium, removing or replacing the aura with the consecration ceremony would only work if the priests involved used true liao. The reticence of the Synod to "waste" true liao on magical experimentation has meant that there is no definitive proof either way.

Like Solace of Chimes and The Chamber of Pallas, The Chamber of Delights creates an aura similar to, but distinct from, the kind of aura a priest can create with the ceremony of consecration. Most obviously, it is not created using liao (and has no spiritual component that might be examined with the insight ceremony). Rather than being drawn from the Labyrinth or the spiritual strength of humanity, it is a construct made using magic. The strength of the aura does not vary; it is not possible to create a durable aura through the use of this ritual. Some magician speculate that it might be possible to make a similar ritual of a higher magnitude that would be more resistant to removal - in the same way that priests can cooperate and invest additional liao to create a stronger consecration.

There are some priests who are quite skeptical of this ritual. They claim that it somehow invokes a false virtue, or even a malign spiritual presence. It encourages inaction rather than action, self-indulgence rather than Virtue. Some magicians have even used auras such as these to support spurious claims that the ceremonies used by priests of the Way are just magic. Worse, they have even been used to found small cults based around the idolatrous worship of eternals. Scholars of magic, especially those associated with the Sevenfold Path have demonstrated repeatedly that while consecrations and enchantments such as these share some similarities, they are different on a profound level. In practice, most priests tend to treat The Chamber of Delight much as they would any other enchantment - it influences the minds of mortals, through magic. It may be a useful tool, or a test for the faithful, but the context in which it is encountered is the most important thing. Indeed, some priests dedicated to Prosperity encourage the use of the Chamber of Delights - after all, it is virtuous to celebrate and enjoy the deserved rewards of hard work and this enchantment encourages everyone to enjoy themselves (provided, of course, there has been some hard work to celebrate ...)

The ritual is known and used by people across the world by many different names. Only in the Sumaah Republic and Iron Confederacy is its use monitored or proscribed. Imperial magicians speculate that it should be possible to create similar enchantments in the Summer, Spring, and even Winter realms although no such rituals are currently part of Imperial lore.

This ritual is designed to create feelings of relaxation and pleasure. It is often performed with relaxing music, especially the sound of stringed instruments. Soothing incense is often burnt, and where possible the area is dressed in deep, luxurious colours and decorated with patterns designed to help relax the mind (mandalas, depictions of the runes of Night and so on). Decorations and beautiful ornaments are often scattered around the area, and both cushions and thick carpets are common. Invocations are almost invariably performed in quiet voices, and may involve participants sitting or lounging rather than standing.

The rune Zorech is often evoked with this ritual.