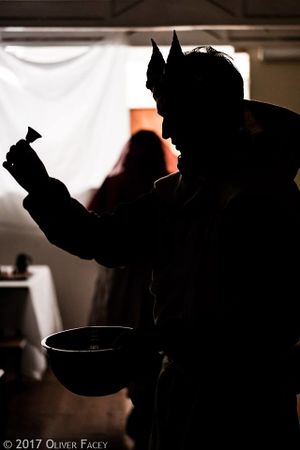 The ritual creates an enchanted aura that encourages negotiation.

This ritual enchants an area with a potent aura. Anyone who enters the area becomes aware of (and subject to) the aura, and experiences a powerful roleplaying effect: they have a strong desire to engage in conversation and discussion with those around them. Violent and aggressive action is distasteful to them. Food and drink consumed in the area often tastes especially fresh, tasty and appetizing and diners feel relaxed and comfortable.

A character who engages in at least fifteen minutes of relaxed conversation in this location aura recovers all lost personal mana. There is no effect if the character is on a battlefield or in a similar stressful environment. If the character makes or suffers an attack during this time, or spends any personal mana, then the fifteen minutes is interrupted and must be begun again from scratch. This magic is not sufficient to allow recovery of personal mana to any character who is under an effect that prevents recovery of mana overnight - most obviously, it will not help someone who is under the effect of Dreamscape of the Endless Hunt or similar curses.

This ritual creates an enchanted aura that encourages relaxed conversation, similar to those that which surrounds some eternals of the Autumn realm. It is commonly used to prepare areas where discussion or negotiation are expected, or to accompany a meal or banquet. In The League, for example, it is often used to prepare chambers for parties or celebrations where known rivals will be forced to spend time in each others' company and where a disturbance is not ideal. The power of the aura to discourage violent can be especially useful when used to enchant an area where enemies will meet, and it has been used in the past with some success to smooth negotiation of peace treaties. Some cambion especially enjoy his enchantment, finding that the Chamber of Pallas creates a fine arena for verbal sparing, debate, arguments and clever conversation laden with innuendo.

The Chamber of Pallas can be made permanent with ilium but this is almost always done inside a building rather than in a tent or other fragile structure - simply because it is too easy to cause the enchantment to collapse by shifting the boundaries of the aura. Magicians theorize that an ilium-infused enchantment such as this would be especially durable. They speculate that in addition to the usual resistance to replacing such an enchantment with an enchantment not also infused with ilium, removing or replacing the aura with the consecration ceremony would only work if the priests involved used true liao. The reticence of the Synod to "waste" true liao on magical experimentation has meant that there is no definitive proof either way.

Like Solace of Chimes and The Chamber of Delights, The Chamber of Pallas creates an aura similar to, but distinct from, the kind of aura a priest can create with the ceremony of consecration. Most obviously, it is not created using liao (and has no spiritual component that might be examined with the insight ceremony). Rather than being drawn from the Labyrinth or the spiritual strength of humanity, it is a construct made using magic. The strength of the aura does not vary; it is not possible to create a durable aura through the use of this ritual. Some magician speculate that it might be possible to make a similar ritual of a higher magnitude that would be more resistant to removal - in the same way that priests can cooperate and invest additional liao to create a stronger consecration.

Some priests are skeptical of this, and similar, rituals. There have been claims that it works by evoking the power of a false virtue, or even some sort of malign spiritual presence. Indeed, there have been a few attempts in the past by particularly outraged members of the Synod to have the Chamber of Pallas (and its companion enchantments) declared to be tantamount to idolatry. Such attempts have not so far amounted to much; in practice, most priests tend to treat The Chamber of Pallas much as they would any other enchantment. It may be a useful tool, or a test for the faithful, but the context in which it is encountered is the most important thing.

Other common names for this ritual are The Feast of Prosperity (which obviously offends certain sensibilities quite badly), the Maze of the Silver Tongue and The Parlour of Honeyed Words. It is known to be used in all civilised nations - even the most skeptical can see the advantage of an enchantment that encourages discussion without violence - except among the magic-hating Suranni.

The ritual is often accompanied with pleasant, relaxing music, especially the sound of stringed instruments. Incense is often burnt, and where possible the area is dressed in rich colours, decorated with symbols of wealth and prosperity as well as items that may provoke conversation. Entertainers are common, and food and drink are often laid out as part of the ritual to help create the correct atmosphere.

The rune Pallas is often evoked with this ritual, but it is just as likely that the rune of conspiracy will be worked secretly into the ritual on the backs of banners or undersides of tables for example