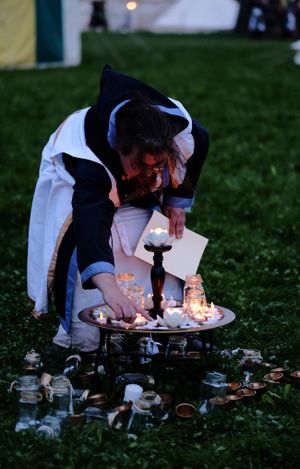 Through magic prepared herbs are made supernaturally fruitful.

Performing this ritual takes at least 2 minutes of roleplaying. The ritual requires a receptacle such as a bowl or cauldron into which the target herbs are placed.

This ritual requires up to five drams of herbs (Imperial Roseweald, Bladeroot, True Vervain, Cerulean Mazzarine or Marrowort), which are placed into a container such as a bowl or cauldron. All the herbs must be of the same type.

The ritual creates one dram of herbs for each herb placed in the container during the ritual.

The ritual may be performed using drams of herbs not common to the Empire, but the results are likely to be unpredictable.

The Spring realm is nothing if not fecund; through this magic, even dried or prepared herbs can be made supernaturally fruitful. The ritual uses existing herbs to create new herbs of the same type, and is especially popular with apothecaries and physicians who do not themselves own a herb garden. The rich League doctor; the itinerant Varushkan herbalist; or the Urizen mage seeking additional herbs to brew a ritual potion, can all benefit from the ability to effectively transform crystals of mana into valuable herbs.

This ritual is effective with the five herbs found commonly in the Empire. It specifically works with herbs, and experiments using other mundane or supernatural vegetable matter have had little success. It may work to create additional drams of herbs found outside the Empire, but the results are likely to be uncertain.

The Churning Cauldron of Bravash has no effect on potions, or on herbs that have already been combined to make a preparation - for example, it cannot be used to create additional doses of liao despite the fact that that valuable substance has a herbal basis.

It is important to note that the herbs used in this ritual are not consumed; they serve as the 'seeds' from which the new herbs are created, rather than as components.

A similar ritual, Madyn's Gift, was formulated at the Lyceum and added to Imperial lore during the Winter Solstice 382YE. Rather than working on the common magical herbs, however, the ritual allows for the creation of additional drams of the peculiar realmsroot.

The most obvious element included in this ritual is the cauldron or bowl used to hold the herbs. Covens and individual magicians who perform the ritual regularly tend to have a specific receptacle that they prefer to use. Often this container has a lid or cover that can be closed to prevent accidental removal of the herbs before they are ready. It may be made of precious materials, and is commonly marked with the rune of fertility.

Water is another common element used in the ritual - the receptacle is often filled with a little fresh water to encourage the growth of new herbs. In the same manner, agricultural symbols and images may be evoked; some Marcher and Varushkan ritualists include a handful of soil from a prosperous farm along with the herbs, while Navarr vates may sprinkle a few drops of their blood over the herbs to encourage them to quicken with new life.