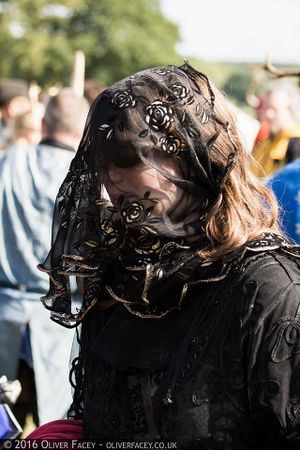 The Cowl of Ashes empowers those who seek to crack open
the portal between life and death.

The Cowl of Ashes empowers one of the most potent, and poorly understood, rituals in Imperial lore. Whispers through the Black Gate allows a coven to raise the ghost of a deceased person, and communicate with that spirit for a short time. Through the power of this ritual, a murder victim may be interviewed to discover the circumstances of their death; a departed politician might be induced to part with the secrets they took to their graves; or the bereaved might be offered one final chance to speak with the loved one they have lost.

The ritual is also dangerous, of course. Sometimes, it fails to raise the expected spirit and something else comes in its place. Most often, this is a ghost of someone other than the expected person - and the accepted wisdom is that the unexpected spirit represents one of the target's past lives. On occasion, however, the ritual causes hungry wraiths or crazed phantoms to appear which seek to overwhelm the coven who have pried open the door to whatever waits beyond life. The longer the target has been dead, the more likely it is that something of this nature will occur, and the more potentially deadly the resulting excursion of spiritual forces will be.

There is one safeguard on the ritual, a safeguard that the Cowl of Ashes exploits to provide additional protection to a ritualist. The spirits called forth with Whispers through the Black Gate can only perceive and interact with the magicians who summoned them. Sometimes this quality can be heartbreaking - a beloved son must have his words to his departed mother relayed via a medium rather than speak to her directly - but when something goes wrong this protection prevents the unleashed spirits from running amok and harming those near the regio where the ritual was performed. The Cowl extends this protection to a ritualist who contributes to the performance - a protection that they can choose to eschew once they know for sure what their Winter magic has raised up.

Some stewards of the dead have also reported that they have encountered unquiet spirits that seemed unable to perceive them when they were wearing these cowls, even when such spirits had not been raised by Whispers through the Black Gate. The protection is unreliable at best, and should not be relied on.

These talismans are most often crafted in the form of veils and cowls, drawing on hearth magic to conceal the identity of the wearer from malign spirits. Wintermark crafters, especially Kallavesi, craft them from bone or ivory in the shape of bird-faces, and often incorporate Gralm, the Rune of Destiny or Yoorn, the Rune of Ending. In the League, a Cowl of Ashes is likely to be a mask depicting the cool detachments of the Doctor, or the unassailable authority of the Prince. The mask is expensive to create, requiring extensive amounts of beggar's lye and dragonbone, with weltsilver chasing and iridescent gloaming used to subtly tint the cloth - but it is especially favoured by those who summon the spirits of the long dead, or who explore the limitations of Whispers through the Black Gate.