To create the title of High Consul. This title is expected to coordinate the activites of Ambassadors and similar positions and report back to the Senate. Additionally, the High Consul has responsibility for interactions with foreign nations where no other Imperial position exists with that responsibility. 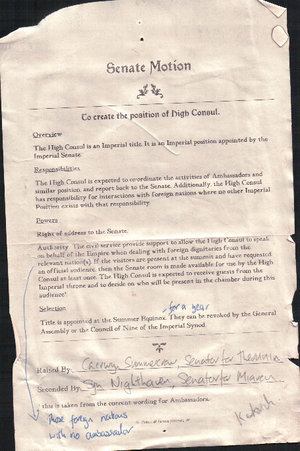 The motion to create the High Consul.

After scrutiny the Constitutional Court have issued clarifications on the right of address and the power of authority and requested minor amendments to the name of the title and the responsibilities.

Authority can only be vested in a single Imperial title. While an ambassador may employ aides, assistants or a proxy, it is not legal for two Imperial titles to be granted authority to represent the Empire to the same foreign power at the same time. This motion avoids any conflict of identity by making clear which title will hold authority, but it is vital to stress that where an ambassador exists then it the power of authority is vested in that title. The title-holder is expected to discharge their duties without undue interference from any other Imperial citizen. If the Senate have granted a citizen authority to represent the Senate then the constitutional position is explicitly that the decision making responsibility lies with that citizen and no other.

Citizens shall not hold more than one high office at a time and must exercise their powers in person.

The title of "High Consul" carries a legal implication that the title-holder occupies a position of authority over the existing ambassadors. This implication is further strengthened by the explicitly stated responsibility that the Consul will coordinate the existing ambassadors. Such a position of authority is categorically forbidden by the constitution.

To make the situation clearer, the Court have recommended that the title be amended to "Imperial Consul" and that the responsibilities be clarified such that the title is expected to liaise with existing ambassadors to keep the Senate informed of ongoing negotiations and developments.