The Imperial Consul is an Imperial title appointed by the Imperial Senate. It was created by the Senate during the Summer 379YE summit, and sparked considerable controversy leading to a clash between the senators and the civil service over the recommendations of the Constitutional Court.

In Summer 382YE the Imperial Senate voted to provide a stipend to the Imperial Consul. They further amended during the Spring Equinox 383YE to make them a member of the Senate - again with a certain amount of controversy.

In Winter 383YE the title was further modified when the Senate chose to construct the Imperial Consulate in Tassato following the suggestion of the Merchant-Prince of the Featherwick Guild, granting additional benefits including briefings on the Empire's diplomatic position, access to merchants from a variety of foreign nations, and equal respect as any regular Ambassador.

The Imperial Consul is however responsible for handling diplomatic relations with any foreign and barbarian power with which the Senate has not created a seperate ambassador. The Imperial Constitution grants the power of authority for diplomatic relations to the Imperial Senate - by creating this title, the Senate divests itself of their remaining authority in this area to the Consul. When dealing with such a nation, their responsibilities are similar to those common to an ambassador

Foreign nations have agendas of their own, and may seek to draw the Empire into their intrigues. The existence of the Imperial Consul does not automatically mean that a foreign nation will engage with them - most nations are disinclined to deal extensively with the Empire while there is no embassy. The civil service and the Secretary to the Diplomatic Corps will do their best to appraise such nations of the role of the Imperial Consul.

The Imperial Consul can only represent the Empire in dealings with foreign or barbarian nations where there is no existing Imperial ambassador with responsibility for doing so. If an embassy for a foreign nation has been completed then the legal powers of the Consul do not cover dealings with representatives of that nation - even if the ambassador is absent or the post has not yet been filled; the existence of such a title is sufficient.

The Imperial Consul has the right to make a Senate address once per summit. This is intended to allow them to present important information for the senators consideration. To make an address, the Consul must inform the Speaker for the Senate of their intention, so that the Speaker can add the address to the agenda for the next Senate session.

The Imperial Consul is a member of the Senate. They are entitled to enter the Senate chamber at the start of a Senate session and participate in the debates. They do not have the power to raise motions or to vote on a motion.

The Imperial Consul enjoys a unique form of mercantile support. Merchants and those seeking favour from every foreign nation with which the Empire has established an Embassy send representatives to Tassato to visit the Consulate. This functions as a series of ministries which allow the Consul to purchase quantities of special materials at a set price, similar to those enjoyed by the respective Ambassadors, albeit not on the same scale.

The Consul spends their money and makes their choices during downtime from their character page. Money is removed from, and resources are placed into, the character's inventory when the downtime is processed.

Representative of the Empire

The civil service provide support to help an ambassador to represent the Empire when dealing with foreign dignitaries from any nation where there is no existing ambassador. They have all the available legal powers of an ambassador; the power to receive a delegation and compose a treaty when dealing with a foreign or barbarian nation.

The Consul receives a unique briefing every summit, containing information about the various barbarian and foreign nations the Empire has no existing ambassador to deal with. They also receive an broad overview of the relationship between the Empire and all nations with which it does have an Embassy. Although these briefings are not as in-depth as those received by the individual Ambassadors, they serve to assist the Consul in discharging their duties as a liaison between the ambassadors and the Senate.

The Imperial Consul receives a stipend of 10 thrones each season from the Imperial treasury. 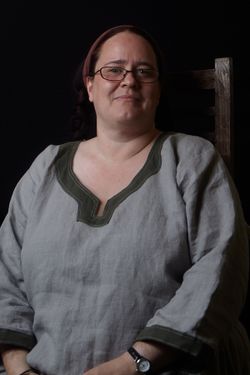 The Imperial Consul works with the Ambassadors to
represent the Empire to foreign nations.

The Imperial Consul is an Imperial position appointed by the Senate. Any Imperial citizen can hold this title, and the consul serves for a year. They can be revoked by the General Assembly and by the Assembly of the Nine.

Refurbished from an old four-storey building a stone's throw from the University of Tassato, the Consulate is an impressive edifice on the eastern banks of the river Vassa. The expanded private docks allow dignitaries and merchants from a wide variety of foreign powers to visit the Consul in private to discuss matters of import - or merely import their goods. The building also features fine apartments for the Consul's exclusive use, allowing them to host guests from within and without the Empire's borders and impress them with the accoutrements of state.

Around a dozen staff also reside in the building, hand-picked by the Civil Service for their diplomatic acumen.

During scrutiny by the Constitutional Court several significant issues were raised with this title. These issues included concerns about the use of the Right of Address, the implicit authority of the title to command other Imperial citizens, and the use of the word "High" in the original title.

The Constitutional Court returned the motion creating the title to the Senate with a series of proposed amendments, leading to extensive and energetic debate between the Senators and Magistrate Karkovich. After spirited discussion, the administrative motion suggesting changes to the presentation of the title was accepted by the Senate.