Emperor Barabbas was a Highborn man who grew up hearing stories of Atun and Atuman and became obsessed with the sea at an early age. He was a charismatic, strong-willed man who developed a following in the Senate while serving as one of the Highborn generals. In his mid-thirties he parlayed his reputation and various alliances into a political career, and eventually to the Throne.

Writers of the time described him as surprisingly open and friendly; he undermined the stereotype of the dour Highborn, without ever giving the impression of being impious. During his life he was praised for his Ambition, Pride and Prosperity, although as the theologian Bishop Eulaile de Tassato is said to have remarked after his death "He was as brave as he was ambitious, as proud as he was prosperous, and as wise as he was able to regurgitate whole lobsters."

Barabbas was elected in a time of expansion, and while he served adequately as the director of the land armies, his real desire was to extend Imperial control over the entire Bay of Catazar. At this time the Grendel were particularly active, launching several concerted raids against the southern coast of the Empire.

Barabbas spent a fortune funding exploration, pouring money into the coffers of the Freeborn shipbuilders. He sought to build a powerful Imperial navy capable of conquering nations overseas, to spread the Empire to Surann, Skoura and ultimately to the destroy the threat of the barbaric Grendel by conquering Attar. He soon realised that he lacked any real skill as a shipwright, but that did not stop his raw enthusiasm for the mariner's art infecting those around him.

He supported the Freeborn expansion into Segura, but his focus was not entirely on the Brass Coast; he encouraged mariners and sailors of all nations to look beyond the borders of the Empire. He was not solely a warmonger, despite some attempts by his political enemies to paint him as such. He actively encouraged trade with foreign nations whose attitudes and politics were not entirely opposed to those of the Empire. A number of trade routes that still exist today were established by Barabbas' pioneers. He also encouraged the Senate to spend money expanding many settlements with good harbours - Siroc, Sarvos, Meade, Trivento and even Bastion all benefited from his maritime spending.

While his enthusiasm allowed the Empire to build a solid fleet, his failure to conquer Attar destroyed the majority of the Imperial warships as well as the fortunes of many of those he had convinced to invest in his ambitious project. Since then the Senate has shied away from any naval projects on a similar scale. 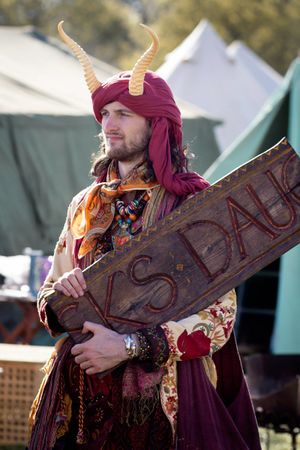 A fragment of Barabbas' flagship

Today Emperor Barabbas is perhaps best known for the manner of his death. He was lost when his Barabbine fleet ran into stormy seas two days south of Joharra, resulting in the first, biggest – and most expensive – naval disaster of Imperial history. Their intention was to build a foothold on Attar and begin a war of extermination against the Grendel.

The enduring legacies of his reign are the naval defences along the Bay of Catazar, and the ships of the Freeborn corsairs. The Freeborn took shameless advantage of his generosity towards all things maritime, using the endowments and investments he encouraged to build the solid core of Freeborn ships that defend the bay to this day.

Highborn archivists point out that his reign also saw a renewed interest in expanding the borders - and an awareness that the Empire did not exist in a vacuum. Relations with foreign nations improved dramatically during his time on the Throne, for example.

Emperor Barabbas rests uneasy beneath the sea; the memorial obelisk that bears his name in the Necropolis sits above an empty chamber. Over the years after his death three distinct stories about his end began to circulate. In one, Barabbas is born again as an albino (or black) dolphin who aids stranded mariners in the Bay of Catazar. This story is likely fanciful, and a development of the more traditional stories about dolphins told to Freeborn children.

The second story suggests that Barabbas, denied burial, is unable to pass through the Labyrinth and instead continues a tortured existence as a restless shade. According to rumour this ghostly spirit has visited Emperors, Freeborn dhomiro and Highborn generals to warn them of raids along the coast by the Grendel and other enemies of the Empire. No reliable evidence to support this claim exists.

Finally, there is a story that Barabbas' flagship, the Basilisk's Daughter, was attacked at the height of the storm and dragged beneath the waves by a kraken of tremendous size. Given that two-thirds of the fleet was lost in the storm, some eye-witnesses certainly survived, but this story did not come to the attention of Imperial historians until some thirty years after the Emperor's death, making its provenance suspicious.

Only one of the ships that set sail with Barabbas survives today; the Lazy Basilisk, an inn on the quayside of Sarvos is made from the remains of the last surviving remains of the Barabbine fleet. It is believed to currently be owned by one of the wealthier (and most secretive) Reckoner guilds. Perhaps unfairly, to this day, to call a ship a “Barabbine tub” is a grave insult to the ship’s crew, and is often thrown at a Freeborn corsair crew by jealous League rivals.

The Invasion of Attar

In Winter 378YE, historical research was commissioned regarding "the naval campaigns of Emperor Barabbas". The key part of the resulting report was made publicly available on the instructions of Leontes the Scribe, the Imperial Archivist, after the Autumn Equinox 382YE.

According to the report, the invasion of the Broken Shore by the Mariner in 199YE is considered by scholars to be a low point in Imperial military history. All the accounts of the Emperor agree that he was charismatic, gregarious, and inspiring – but regrettably this leadership did not translate into military effectiveness. The few surviving records imply that there was relatively little attempt to assess the true fighting strength of the Grendel before the construction of the navies began. There is a surviving copy of the speech by Barabbas to the Imperial Senate that strongly implies that matching Grendel navy for navy would be sufficient for the Empire to triumph.

"... no army that walks the earth is a match for an Imperial force." he said. "Our great destiny, laid down by the First Empress, carries our soldiers to victory. No force of war will deny us our triumph. I propose to raise navies – one for each of the great cities on the Bay of Catazar. We will match their strength on the waves – but they cannot match our spirit. So we will fall on them like a storm and destroy them utterly."

One of Barabbas' chief opponents in the invasion scheme was the Freeborn general of the Red Wind Corsairs, Estarna i Sirta i Riqueza. Estarna openly criticized the Emperor's plans citing superior Grendel naval experience and shipbuilding skills. These criticisms were not well received by the Emperor – or the Senate that backed his plans. In 198YE Estarna was removed by the Emperor who took his seat on the Military Council. Despite this, Estarna remained a thorn in the Emperor's side – he was called on twice to speak in the Senate where he openly ridiculed the planned invasion citing a shortage of intelligence and predicting disaster.

"This plan we are being asked to consider is the work of a child." He said during his second speech. "Saying it does not make it happen. We have no idea of how many armies the Grendel possess – what forces await us once our troops land. Every throne has been spent building fleets – nothing remains to pay for the spy networks, informants, and turn coats we need. Wars are won by reconnaissance, not by pretty ships. This wave of ignorance will drown us all."

Records of orders issued by the Imperial admirals show that the three navies intended to remain close together as they sailed around the Bay of Catazar, with the intention to anchor off the coast eighty miles west of Dubhtraig. The general assumption is that the Military Council had agreed to begin a conquest here – but of course records of what they planned for future seasons never occurred after their plans were wrecked by the great storm.

Sadly there are no complete descriptions of the fate that befell the vessels. It is certain that there was a storm – all five of the accounts by mariners traveling with the vessels that survived agree on this point. However while four of the accounts imply that it was the storm that wrought destruction, the final account clearly identifies Grendel warships nearby waiting to pounce. The popular account of the incident has made little mention of the involvement of the barbarians so this may have been nothing more than a figment of this final author's fears.

Whatever their involvement in the sinking of the Barabbine fleet, the Grendel were clearly not content to leave it there. They quickly destroyed the Imperial docks at Siroc and Sarvos with ferocious lightning attacks following the loss of the great navy. Presumably they planned to capitalize on the loss of so many Imperial ships, perhaps to ensure that surviving vessels could not be resupplied. Perhaps not however, since they chose to leave the final shipyard at the Necropolis – it remained untouched by the war and was only dismantled two years later as part of a grudging peace settlement with the Grendel.