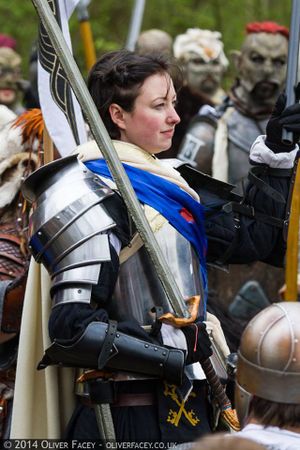 Bolstered with this magic breastplate, a warrior can push aside the pain
of a serious injury until they have time to deal with it.

The enduring breastplate bolsters the strength and will of the wearer, allowing them to push aside the pain of a serious injury until they have finished fighting. Some conditions can be overcome entirely in this way, but the majority still need treatment when the battle is over. In some cases, the use of this breastplate has lead to death - while a warrior might be able to continue fighting despite their cracked ribs or internal bleeding, if they wait too long the condition can turn fatal and the breastplate is no use against the onset of death.

She'd been winning the debate in the Senate, she felt. The Senator for Morrow, looking as untidy as ever, was pressing for a front-line role for mages, but the assembled representatives of the Empire were with me. Magic is best used as behind the front lines, leaving those who stand and fight to hold the line, and then press to victory.

***And when you see the opening, use the shield to counter-weight...***

Then the Navarri messenger came in, and the world changed just a little. Nothing was going to get decided while the floor was such a tumult, so she'd called for silence. This wasn't time for debates about strategy. She proposed the Senate instruct the military council for direct assistance to the Wintermark, and asked: "Who's with us?", and one by one they all fell in behind her. Even the Senator for Morrow accepted the inevitable.

She'd lobbied hard to be allowed to go with the elite force the Military Council decided was the right strategy. It had cost her heavily, she'd owe the General of the Bastion army for some time. He personally made a place for her in General Irontongue's contingent. But by the Virtuous path, she knew it was worth it. Even if it still hurt to breath, and she owed her life to a mail shirt that had been restored every year by the artisans of her Chapter for longer than anyone could remember. They weren't done yet, she'd be back out soon, the General said.

***And turn and revel in victory over the barbarian...***