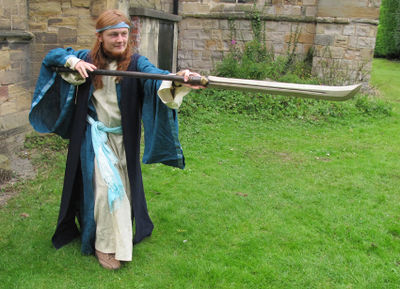 The Fell Iron Fury is a weapon for an individual. No nation could afford the cost of spreading these through even a small unit. However, a commander who leads from the front, or the sort of heroes who are sent through the portals to do great damage at a precise point - these are the people who the nations of the Empire outfits with their best. Few are the artisans with the knowledge of how to make them, fewer still the treasuries with the stores of green iron and ambergelt needed.

The kohan of the Freeborn, the sentinels of Urizen, or perhaps a particularly successful warden. These are the people who will look to get themselves outfitted with a Fell Iron Fury. Fighters with the knowledge of when to strike to kill, when to disable, and when to knock down. Warriors with the skill to hit precisely enough to kill through the gaps in heavy armour; anyone can use the weapon will leave a lightly-armoured enemy dying.

General Johor was already in his cups when Iskandar entered. He gestured angrily with a crumpled up note clenched in one fist. He tossed a wineskin over to his aide and started ranting without further preamble.

"Enrico is complaining about Felix again, isn't he?" The general began an improbably high-pitched impersonation of the Freeborn champion's accent. "He has no fire in him, no spirit. That serenity speaks of a hollow soul, a soul of ice, nothing in it that would excite the smallest measure of loyalty, the passion that welds a family together, so that it will bleed for itself. You cannot trust him with the captaincy! He will never be able to lead troops!"

General Johor crumpled the piece of paper up, threw it into the fire and grabbed another scroll from his table. Iskandar wisely said nothing and let him burn himself out.

"And of course as soon as Felix gets a whiff of one of Enrico's messengers I have scant minutes before the sentinel finds an excuse to send one of his own. 'I don't wish to appear brusque, but that painted dancer is only a mere breath from barbarism. Uncouth. That whirling, it's hardly a proper combat form, and is a danger to any troops unfortunate enough to fight near him. It is more like dancing that the serious business of making war. I could argue that when he does the right thing it can only be coincidence, so dizzy must he be from all that spinning; I think that it might be considered a poor decision to give such as he a position of authority in tomorrow's battle etc etc."

The second letter followed the first into the fire and the general sat down heavily in his chair. He put his head in his hands

"It's hard to believe they both buy the same weapon from the same artisan. All I asked for were some people who knew one end of a polearm from the other. Who'd be a general in this bloody Empire?"