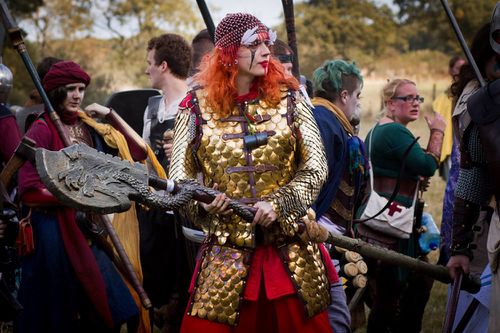 Most Freeborn families remember a time when each was responsible for their own defence and try to remain prepared should such times come again.

Most Freeborn families encourage their children to practice some martial skills. The Freeborn remember a time when the families were responsible for their own defence and they try to remain prepared in case that day should come again. Those Freeborn who are not career soldiers are by day traders, farmers and labourers, only turning to martial matters when required, though all are ready to do so.

Many families maintain a small dedicated fighting force, usually family members who have shown a capacity for martial excellence. These warriors protect Freeborn caravans and settlements from bands of raiding orcs or adventurous bandits. Families take pride in equipping their warriors with the best equipment they can afford. These family warriors often train to fight in heavy armour in close formation.

Centuries ago, the hakima began to gather Freeborn who had been disowned and turned them into a fighting force. By serving their tribe the Freeborn were able to find a way to redeem themselves. These groups were called kohan, meaning without family, and their number has grown considerably over the years. Although they still accept those who have been cast out, most kohan are volunteers, individuals who find such joy in battle that they cannot give it up. They fight for the joy of battle, flinging themselves into combat with a blood-thirsty relish that can easily dispirit an enemy. Kohan often adopt flamboyant costume and grotesque body paint, the better to unnerve their enemies. When they are not fighting they are usually found celebrating their continued survival with that same intensity.

The Brass Coast currently fields two Imperial armies; the Red Wind Corsairs and the Fire of the South.

The core of this army is made up of corsairs and for centuries the Red Wind Corsairs were the closest thing the Empire had to a naval force. Many of the soldiers who serve with this army have experience serving as sailors, and the force is supported by a number of boats and ships. The army often takes advantage of this to reinforce and support difficult positions or move quickly to areas where it can do the most good. The experienced privateers who often serve as officers excel at foraging supplies and prior to the Winter Solstice 381YE, the army was known for its enthusiastic plundering of barbarian territory. After an opportunity to turn away from cruel tactics, Gonzalo i Riqueza was sent by the Freeborn assembly to encourage the corsairs to embrace the idea of ransoming their foes rather than simply robbing them - leading the army focusing less on robbery and more on daring raids.

The first Brass Coast General leads the Red Wind Corsairs, and is appointed (or re-appointed) at the Summer solstice each year.

The Fire of the South

The soldiers of this army are trained in tactics appropriate to flat, open land. Often recognised by their brightly polished armour, their warriors and supply lines are trained to be especially mobile and responsive to attacks from any direction. This gives them a marked advantage over less adaptive armies, allowing them to cover great distances very quickly.

The second Brass Coast General leads the Fire of the South, and is appointed (or re-appointed) at the Autumn equinox each year.

This first Imperial navy since the reign of Emperor Barabbas was constructed at the Atalaya Shipways in Madruga over the course of 379YE. Enthusiasm for constructing the navy peaked during the celebrations surrounding the Imperial victory over the Lasambrian orcs in Segura, and the Imperial Synod capitalised on that enthusiasm to provide additional support to the project. The navy launched for the first time just before the Winter solstice 379YE.

The Freeborn Storm was destroyed just before the Winter solstice 381YE during the Grendel attack on Madruga.

Lost long ago, the Burning Falcon were famous (and in some cases infamous) for the passionate zeal with which they fought. In 248YE the Burning Falcon army was destroyed by the Jotun while fighting to defend the academy at Ishal in Kallavesa. Since their loss of it the Coast has not enjoyed such a large and organised force of kohan on the battlefield - although recent developments have suggested that the army may at last be on the verge of rising from the ashes. Not that the Burning Falcon is without controversy of its own - Emperor Nicovar took control of the army and wielded it as a brand to burn the libraries of the Empire. Some historians suggest that it was lingering resentment for their role in the burning of the libraries that lead to the Falcon being left to fight alone against a force of orcs three times its size. 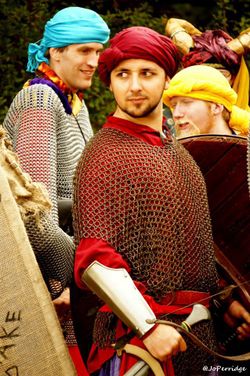 Months of wrangling with the people of Varushka over the use of the Iron Helms lead to a major rift between the armies of the two nations. The Varushkan people chose to stand with the Iron Helms, disregarding the concerns of both the Brass Coast and Wintermark. As a consequence, whenever a Freeborn army is involved in the same campaign as a Varushkan army, the Vaushkans provide a tenth fewer victory points. If armies from both Wintermark and the Brass Coast are present, the penalty increases to a fifth.

During the Spring Equinox 383YE, a motion to refound the Burning Falcons was raised. The Imperial Senate did not support it, but the Freeborn national assembly sent Luis i Alamein i Guerra to enact a mandate to encourage their armies to seize the mithril they would need to support it - presumably with the intention of trying again once they could prove they had the materials. Until start of the Spring Equinox 384YE, the Freeborn armies will be on the look-out for any opportunity to acquire mithril. During that period the general of the Fire of the South will be able to issue the plunder order in addition to the normal orders they can issue. If they do use this order, or if the Red Wind Corsairs use their daring raid order, they are likely to see a small increase in the amount of resources they take and they will be significantly more likely to acquire mithril rather than either weirwood or white granite as part of the spoils they receive.