The mithril mines of north-eastern Temeschwar began as several jealously protected salt mines in pre-Imperial times, until the discovery of a major seam of mithril ore roughly ninety years before the foundation of the Empire. The mine owner who first uncovered the seam, Zadiny Zhestokyna Umneya used a number of both honest and dishonest tactics to take control of the other salt mines, allowing her to exploit what were later discovered to be massive deposits of mithril beneath the mountain. The Umneya declared themselves a proud Varushkan family, but maintained close ties to boyars (later merchant princes) of Temeschwar to the south.

At one time, a physical fortress stood over the mines, built with stone imported from the distant quarries of Brez. It was destroyed during the attempt by the insane boyar Alderei the Fair to conquer all of Varushka after six months of pitched battles between his magically-supported forces and the soldiers that would eventually form some of the core forces of the Wolves of War. The fortress was never rebuilt, and its ruins were quickly cannibalized by the local citizenry.

A popular story suggests that the initial mithril seam was actually discovered by a gang of orc slave workers, and while there is little proof either way, it was widely publicised by the abolitionist cause during and after the orc rebellion. A number of songs were written about the treatment of these orcs, who urban legend claims were killed to prevent them revealing the discovery of the mithril ore before their owner could properly secure it. The historian Eduar di Temeschwar uncovered some evidence that these stories were based on actual events - but that early versions of the tale described the murdered miners as being pre-League Tassatan workers looking to make their fortune in the northern mines and cruelly betrayed by the people of Temeschwar. The truth will probably never be known.

As with the Eternal Shafts of Time, ownership of the Fortress was hotly contested between Temeschwar and Karov in the early days of the Empire; its physical location is little more than a mile from the border with the Varushkan territory, and a strong case was made at the time that the boundary could easily have been drawn to include the Fortress of Salt. While Temeschwar retained nominal control of the territory around the Fortress of Salt, the mines (along with the Great Pits of Ennerlund) were ultimately declared an Imperial Bourse resource. 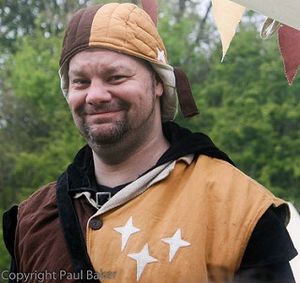 The Marcher Tobias Shanks of House Bolholt took the Fortress
of Salt during Autumn 379YE elections.

The Seat has no particular responsibilities; they simply receive a bounty of mithril which is theirs to do with as they will. If the Fortress of Salt were to be threatened in any way, it would be the responsibility of the Seat to deal with those threats. Likewise, if any particular opportunity were to arise related to the Fortress of Salt, the Seat would expect to be consulted as to how that opportunity might be resolved.

The Seat has control of a source of mithril and receives Bourse certificates to represent that control. They can dispense this resource as they choose. Production is 25 Imperial wains of mithril every season.

As with all mithril Bourse seats, the holder of the title is determined during the Autumn Equinox. As an Imperial seat, any Imperial citizen may participate in the auction and hold the title Votes are recorded in private in conjunction with the civil servants who support the Bourse.

Custodianship of the Fortress of Salt is retained for a year, or until the citizen holding the seat dies, or steps down. An Imperial Bourse seat cannot be revoked by the Imperial Synod.

This title is currently held by Tobias Shanks; it will be reelected at Autumn Equinox 384YE. The table to the right shows the citizens who have been elected to hold this title in the years since Empress Britta died.