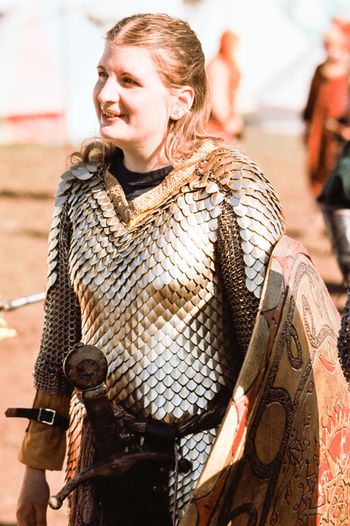 Aina i Shartha i Riqueza in a suit of golden scale.

In the Brass Coast, this beautiful orichalcum alloy armour is favoured by Kohan and corsairs alike. It allows them to shrug off terrible wounds and continue to fight. Some corsairs attach favourite golden coins, won in successful raids, to their armour in small net pouches to add good fortune on top of the armour's already considerable power. In other parts of the Empire, this armour is built as gold-sheened orichalcum chain. Its gaudy and striking appearance makes it popular with Changelings everywhere.

It was first created in Dawn where it is most commonly called Irrepressible Plate. It was devised by a Changeling named Antonin de Baudin as part of his Test of Mettle. He was challenged to remain standing throughout a battle with a notoriously vicious band of barbarian orcs. The test would have suited a dedicated warrior, but Antonin was an artisan of great repute and the test was clearly devised to deter him. The proud changeling refused to accept the snub and spent a year and a day at work in his forge to create a means of victory. During a brutal raid, the Knights of House Baudin were joined by a mysterious figure entirely encased in armour of magical metals. The stranger turned the tide of the battle, recovering his strength each time the Knights thought the orcish forces had overcome him. At the battle's end, the stranger removed his helm and revealed himself as Antonin, his test complete with the aid of his Irrepressible Plate and a considerable supply of Philtres of Strength. Antonin eventually became Earl of the house.

The four runes of Summer are commonly etched onto this armour, to bring additional strength to supplement the determined soul bonded to it.

We pulled the corsair in his golden armour out of the pile of bodies, and at first I was sure that he must be dead. Through blood-caked lips he asked us if the battle was over. We told him that it was not, the orcs were still pressing hard on the left flank and we had been ordered to search for survivors prior to falling back. Grunting, he rose back to his feet, spat out a tooth and a mouthful of blood, stretched his shoulders and hefted his wicked falchion through a couple of sweeps. When I told him that he was heading in the wrong direction, that we were retreating, he called back over his shoulder "You're retreating, I'm advancing."