Empire is deliberately a gender-neutral setting by design. There are no roles, character types, jobs or positions in the setting that are restricted by gender or are stereotyped as belonging to any particular gender. For example; soldiers, healers, generals, senators and empresses are all equally as likely to be women as they are men. We are not interested in exploring themes of real world gender discrimination, and we want our games to be welcoming to players of all genders.

To support this goal, we ask participants to be mindful of their use of language when addressing others. For example, addressing a crowd of Imperial citizens about to take the battlefield as "men", "lads" or "boys" will make some players feel excluded and does not make sense in a universe where half the warriors are not male. We appreciate that the use of gendered language is habitual and everyone makes the odd mistake; but a concerted effort to use appropriate in-character language that fits the setting will improve the game for everyone.

Half of the most famous martial heroes in the Empire's history have been women. The Empire's armies have roughly equal numbers of soldiers of all genders. Phrases that are common in modern parlance, like "protect the women", imply that women are helpless and need protecting which literally makes no sense in Empire.

These sort of phrases jar badly with many players, disrupting their immersion and reminding everyone that this is a game. An individual man or woman might need protecting, but the idea that "women need looking after" is inappropriate in the game in exactly the same way that talking about Star Wars is. Most live roleplayers can well understand how important it is to avoid modern references during time-in. We ask all players to appreciate that verbal references to protecting women violate the setting in the same way - and to make the same effort to avoid them. 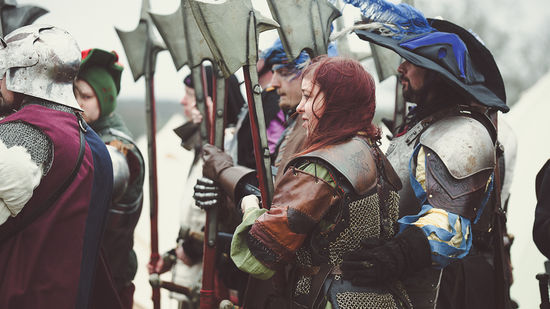 Many participants are accustomed to using gendered nouns like "men", "guys", "lads", or "boys" as familiar terms to describe groups of people, particularly warriors or soldiers. Martial groups might traditionally be expected to be male, but in Empire martial groups are populated by characters of all genders. This means that a general who refers to her soldiers as her "men" is using language that does not fit with the setting.

It is also common in modern speech to use these words as a shorthand when referring to a group that include people of all genders. In the vast majority of cases, the speaker intends their words to refer to men and women collectively. That isn't what is communicated however - it may sound to some listeners as if the speaker meant to address the group as if the women were not present or were irrelevant. Out of respect for other participants, we ask players to be mindful of their language and try to avoid using male collective nouns when referring to mixed groups of individuals. It is absolutely fine to refer to groups of men in gendered terms since there is no confusion over what was meant.

You must respect other participants and try to use the pronouns they ask you to use when referring to them. We understand that it is easy to make honest mistakes in this regard, but refusing to acknowledge a correction or deliberately misgendering another player is not acceptable at our events.

The themes that exist within Empire include mind-influencing magic, drugs and addiction, slavery, human sacrifice, racism and prejudice, prostitution, violence, robbery, torture and murder. They do not include non-consensual sex or sex with minors - these concepts simply do not exist in the Empire setting. All players must make every possible effort to avoid overt references to any form of non-consensual sex while roleplaying their character.

We have made these design decisions for our setting because we want to deliver a game where players who have had traumatic real life experiences can be confident of what themes they will and what themes they won't encounter in the game. It is not possible to know what real life experiences other players have suffered, so you must avoid in-character references to either of these two subjects in play to ensure that you are complying with our rules and that your character's words fit the setting.

If a player makes reference to non-consensual sex while roleplaying their character, it is appropriate to appraise them of the rules prohibiting this at the first available opportunity, even if this disrupts ongoing roleplaying.

We appreciate that it is not easy to create new song lyrics - finding new words that scan and are mellifluous is a challenge that makes finding the correct language more difficult than regular speech. However it is possible to work on songs before an event, reading lyrics through and taking time to ensure that the words fit the language guidelines for the setting. There is more time to get a song right than there is when simply talking in-character.

In a few cases, there will be instances where it is impossible to find a replacement for a single word like "men" or "boys" that rhymes and fits the meter of the line. In those circumstances the song is acceptable provided it does not directly contradict the setting. Songs that imply that women in Empire are helpless or need protecting in some way don't fit the setting and do need updating, they should be avoided if it is not possible to change the lyrics to fit the setting.

Songs like three dirty goblins, that notoriously celebrate non-consensual sex, may not be performed at our events, even if the offending verses are changed or removed.

Young roleplayers of every age are encouraged to attend and enjoy Empire, provided that their parents acknowledge and accept that this is not a family-friendly event. Our goal is to create a game that allows young players to participate alongside adults, rather than to create special rules to accommodate the presence of children. Because of this approach, it is acceptable to use profanity while in-character.

As swearing is permitted at Empire, it is not appropriate to complain at the language used by other players in the presence of children for the same reason that it is not a good idea to complain about children crying - it is very difficult to roleplay these scenes without confusion about the IC/OOC nature of the complaint. It is normal for characters in the setting to choose to avoid a string of expletives in front of a young child, in the same way that it is in the real world, but it is still acceptable in game.

The language we use affects other players; players who are able to speak eloquently as their character enrich the game for everyone. A Marcher yeoman and a Dawnish earl would use different patois and a different cadence. The mark of a great roleplayer is someone who can adopt mannerisms of speech that are convincing for the character they are portraying.

Most of us cannot always achieve that but all participants are expected to try to use language that is appropriate for the game and that fits the setting when roleplaying their character. All participants should be mindful of their language when roleplaying to try to avoid obviously modern slang and phrases. What our code of conduct requires is that players accept that the kind of gendered language laid out above is inappropriate in the game and commit to trying to eliminate it over time to improve the way they roleplay their character - and thereby make the game better for everyone.

The language we use is a matter of habit as much as conscious thought. It is possible to change it, but it is not easy. Just as we ask everyone to commit to improving their language over time we also ask everyone to appreciate that all players will make mistakes and find themselves using phrases that they use in everyday speech. The requirement in Empire is a commitment to adopt inclusive language that reflects the setting but we ask everyone to understand that that takes time and that some participants will find it more difficult than others. 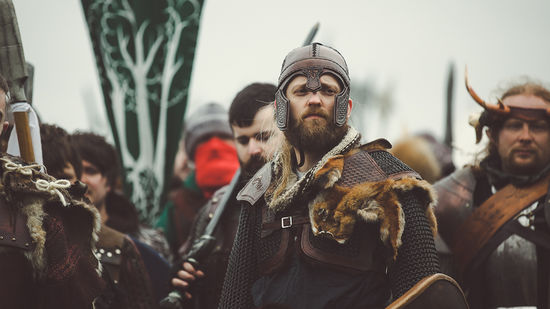 Our goal is to create an immersive event where as many people as possible feel welcome to attend - but public rebukes for a slip of the tongue have the opposite effect - they make people feel unwelcome. They also undermine the immersion of the moment. A poor choice of words when roleplaying may include language that doesn't fit well with the setting, but the damage done to everyone's immersion is compounded by addressing it when everyone is in-character.

Just as we ask all participants to commit to making an effort to use language that fits the setting, so we ask all players to accept and appreciate that other players are striving to meet their commitment. Our rules of conduct ask people to try and use the most appropriate language they can for the game - everyone should respect that other players are trying their best and respect the effort being made. Publicly correcting another participant's language is rarely the most effective way to help other participants improve and we ask everyone to avoid doing it where they can.

If you are think that another participant is unaware that their general language use is not appropriate for the game, then have a quiet word with a friend (or with them directly if you are a friend) when they are not actively engaged roleplaying. If you are genuinely concerned that another participant is actively refusing to follow the rules of conduct for the game - then you should ask a member of crew to deal with that - just as you should do if you believed they were not taking their hits on the battlefield.

If another player's behaviour represents a contravention of our code of conduct that goes beyond using a gendered word for a mixed group of people - for example using the wrong pronoun to misgender someone, talking about non-consensual sex, harassment, or by violating our guidelines for equality and diversity then it is appropriate to let them know their actions are not acceptable as quickly as possible, regardless of any disruption to the roleplaying. Participants are encouraged to intervene to correct the situation regardless of whether they are the subject of the inappropriate language or not.