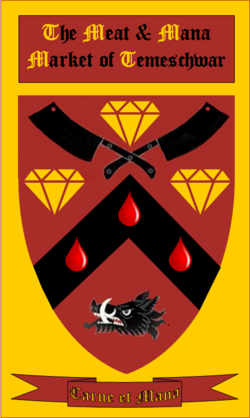 The The Butcher of The Meat and Mana Market of Temeschwar is an Imperial title awarded to a League citizen. The official title is a not insignificant mouthful, meaning that within a week of the ministry being completed it had already been shortened to the "Magic Butcher"

The Butcher is responsible for ensuring that all business taking place at the Temeschwar Mana Exchange is above board, although the actual day-to-day running of the Exchange is handled by officers who are well paid for their work. In the event that the Exchange was threatened, they would be expected to deal with those threats; they might also be called on to make decisions about the broad policies of the Exchange such as whether certain nations or individuals should be prevented from trading, and so on. In return, the agents of the Exchange appraise the Butcher of opportunities to purchase crystal mana at bargain prices.

A Market for Mana

The Temeschwar Mana Exchange is a ministry. The Butcher can purchase quantities of crystal mana at a set price. The Butcher makes their decision how much money to spend during downtime from their character page. Money is removed from, and resources are placed into, the character's inventory when the downtime is processed.

A Market for Meat

The Butcher is in a position to acquire the finest cuts of smoked and salted meat for their own table from the most prestigious meat market in Temeschwar. While this has no game effect, the Butcher may use this as an excuse to cultivate a reputation for gourmet feasting.

The title can be held by a citizen of the League. They can be revoked by the General Assembly, the League National Assembly, and by the Assembly of the Nine.

The Mana Exchange was commissioned by Gant Archama of the Guild of Torn Banners during the Winter Solstice 381YE, two years after the Tassato Mana Exchange in Tassato. Work was completed shortly before the Spring Equinox 382YE.Taking advantage of an (opportunity to construct branches of the Exchange in other League cities, it was the long-serving senator for Temeschwar's final motion before his death in battle. The work was paid for and completed by Gant's rival and ally, Lorenzo 'La Volpe' of the Bloody Butchers Guild of Temeschwar whose construction of the several great works know as the Legacies of Virtue Lorenzo had led to a significant increase in the amount of mana available in the League cities.

The exchange itself occupies a heavily fortified three-storey building in Temeschwar with a beautiful white granite portico. It has several heavily reinforced sub-levels with mithril-infused wards against scrying and intrusion. The business of the Mana Exchange is the sale and purchase of crystal mana. While many of the customers are League citizens, the Exchange is open to customers from across the Empire and beyond.

Built on the eastern side of one of the cities oldest meat markets, visitors can trade in crystal mana and then purchase a dizzying array of sausages, hams and the choicest cuts of cooked meat from the nearby market stalls. Indeed, in some parts of the city the Exchange is already being referred to as the Bloody Butcher's Meat and Mana Market.

As with other structures paid for by La Volpe, heraldry of the Butchers Guild and images of crossed cleavers and blood drops are prominent. Visitors to the exchange pass under an arch formed of statues of Gant and Lorenzo shaking hands. The entrance hall is dominated by a plaque commemorating the courage and prosperity of those members of the Torn Banners who died alongside the late Temeschwari senator.

This title is currently held by Lisabeth von Temeschwar; it will be reelected at Spring Equinox 384YE. The table to the right shows the citizens who have been elected to hold this title in the years since Empress Britta died.