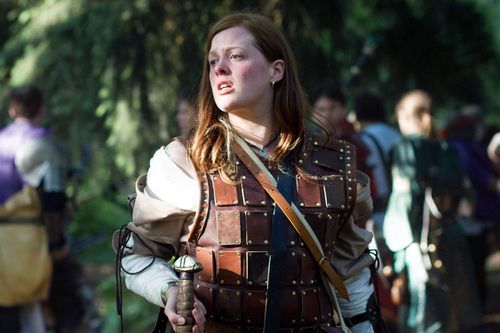 The Marauder's Cote often takes the form of a sturdy leather coat with strategically placed light metal plates - often of mithril steel alloy. It provides some protection to vital organs, but the main thrust of the magic that empowers it is not defensive, but offensive, in nature. The Marauder's Cote allows the wearer to strike mighty blows that can cripple or disable their opponents. The runes Tykonus and Jotra are commonly used to enhance and empower the armour - engraved on metal plates, or sometimes scored into the shoulders and arms. In both cases they may be inlaid with small amounts of green iron, or greensteel.

The Jotun are known to make use of this armour; indeed some scholars suggest that the first suits used by humans were captured from the orcs. An old Wintermark story tells of three siblings who set off on a heroic quest to seize the secret of the Marauder's Cote from the western orcs. Each sibling hatches a different plan; one challenges the orc runesmiths and tries to take the secret by force; one uses Night magic to try and tease the secret from the mind of the sleeping runesmith; and one tries to steal the secret through cunning and trickery. Depending who is telling the story, two of the siblings fail but the third succeeds and brings the secret (a schema, if there is any truth to the story) back to Wintermark. Interestingly, the Jotun are said to tell a similar story - but in their version, a runesmith is inspired by a "powerful spirit" to set three challenges for a single Wintermark hero who seeks the secret of the Marauders Cote. The hero overcomes the challenges, and is rewarded with a tablet containing the secret of crafting the magical armour. Imperial scholars familiar with this version of the story suggest that the powerful spirit may well be one of the Summer eternals - most likely Barien or Cathan Canae.

Regardless of where it came from, the Marauder's Cote waxes and wanes in popularity among Imperial soldiers. It is obviously of most use to a someone who already possesses a reserve of inner strength, but it can also be useful to someone wielding a Trollslayer's Crescent, or bearing an enchantment such as Still Waters, Running Deep.

The main advantage of the armour is that it is cheap to make and reasonably lightweight; two factors that have seen it enjoy an enduring popularity among the yeofolk of Dawn where it is usually called a Yeofolk's Hauberk, and in parts of Wintermark where it is called either a Marauder's Secret by those familiar with the poetic history of the item, or a Marauder's Bite by those who have been on the receiving end of a Jotun orc wearing it.

It is also popular with some Imperial Orcs, where it is often known as a Reaver's Cuirass. The association with reavers means that some orcs look down on it and its wearers. Those who favour its use however are quick to mention tales of Redsword Ferrak, a former gladiator, who used a Reaver's Cuirass throughout her career. From her first fights in the illegal battle pits of Sarvos; through the Orc Rebellion; during her tenure as general of the Summer Storm; during her several "sabbaticals" during which she lead reaving bands to raid the Broken Shore and the Mallum. Her armour took the form of a thick leather front-and-back plates secured at the shoulders, with runes marking the shoulder blades, and this is the common form used by orcs today. It has also been adopted by some League bravos inspired by tales of the orc hero's relentless aggression.