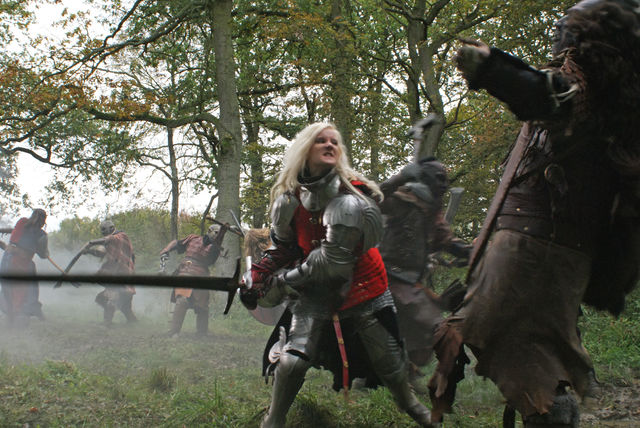 A Trollslayer's Crescent is a massive great-axe, usually forged with a sweeping crescent blade. They were first wielded in the short war with the trolls, and according to legend the heroes among the first Steinr fell from the heavens with these weapons in their hands. The earliest sagas claim that three of these axes were crafted of "star-stuff" - possibly a reference to the use of ilium in their forging - and that two of them were given as gifts to the warleaders of the Suaq and Kallavesi warriors before the final battle. If these weapons are anything more than mythical, their locations today are unknown.

Indeed, most stories associated with these weapons verge on the mythical. Though the recipe can be sought out by any determined smith, the cost is so great that few are made. The ancient Vard hero Vesna, a briar warrior of unmatched skill and a forerunner to the wardens, is said to have used one of these great axes to cut both heads off a particularly vicious chimera which plagued the mountains of Volodmartz. In Dawn, these blades are known as Summer Sickles, a reference to legends of three great knights who quested into the Summer realm to slay three of the most fearsome beasts they could find there, each armed with huge two-handed swords of green iron.

Some combination of the runes of Summer tend to be inlaid into the hilt in weltsilver and orichalcum, but Hirmok, the Rune of Dominion, is also used to represent the triumph of the human spirit over any obstacle. Perhaps once in a lifetime, one will be made using Zorech, the Rune of Passion, for a hero who is pursuing some vendetta or loses themselves in the madness of battle, but such weapons are seen as so unruly that they may as well be cursed.

The gift was laid before the Thane. A mighty axe, blade shimmering with iridescent colours, a weapon for a hero. "Saga! Saga! Saga!" the banner-bearers called, slamming the pommels of their knives on the oak board.

The scop stood up, took his harp in hand, and a silence fell in the hall.

Verse after verse came, in praise of the first heroes, and the nation of Steinr, the formation of Wintermark and of all that had come since, verses added with every new tale that the hall told of its heroes. Then the scop turned to the visitors, and in particular to a burn-scarred figure who had stayed at the back.

The entire hall erupted as the rune-smith bowed, her name remembered now for as a long as the hall should endure. The scop smiled. Maybe it wasn't his best work, but he'd polish it later. After this much beer had flowed, no-one ever remembered the new verses anyway.

But they all knew the last one, always the last and always shouted by everyone, passed down the line of scops who had sung in this hall since the Empire was founded. This was not a verse for harp, this was a verse for hammered tables and smashed drinking horns.

First Empress came to us, Wisdom she spoke to us
Empire like thanes-hall, nine nations as one.


These are our stories, they say who we are."