The Master Apothecary is expected to use the herbs provided by the sinecure to create potions of use to Imperial troops. While the title itself is national, the responsibilities could easily be interpretted to cover aiding soldiers of any Imperial nation. Further, there is a tacit suggestion that the Master Apothecary could feel empowered to organise other apothecaries to make more potions than are possible with just the herbs from the sinecure.

In addition, if the garden were to be threatened in any way, it would be the responsibility of the Gatekeeper to deal with those threats.

Bounty of the Master Apothecary 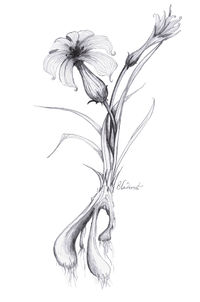 The title can be held by a Wintermark citizen. The Master Apothecary has tenure, and serves until they die or step down. They can be revoked by the General Assembly, the Wintermark National Assembly, and by the Assembly of the Nine.

Calling the sinecure the Master Apothecaries Garden is slightly ironic. Far from a neat, tended, walled cottage garden, it represents a diverse variety of small isolated groves and windblasted hilltops spread across many miles of the rolling hills of southern Kalpamark. The Master Apothecary, and the small number of gardeners who tend the various groves, need good boots and stout sticks at least as much as they need gardening tools.

This title is currently held by Kesa Algarsdottir. This title has tenure, the occupant may hold the title until it is revoked, they die or they relinquish the position. The table to the right shows the citizens who have been elected to hold this title in the years since Empress Britta died.