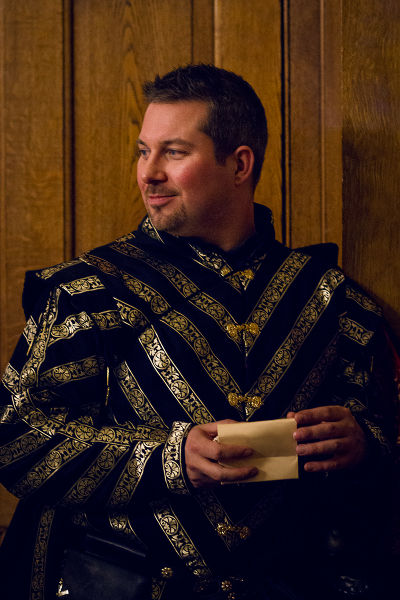 A moonsilver doublet in the Temeschwari style.

"Moonsilver" is a term used to describe methods of adding goldwork to garments using a combination of weltsilver and mithril. The garment is surprisingly heavy, and with dragonbone fixtures it can become even more bulky. Like the Wyvernsting Spaulders and the Glamourweave Robe, a Moonsilver Doublet allows a magician to weave their mana more efficiently, storing tiny amounts in the weave of the doublet to be called on in an emergency. Unlike those more warlike garments, the weave of weltsilver threads allows the wearer to quickly weave the heal spell without the usual drain on their personal magical reserves.

While the Trollsweave Vest was developed in Wintermark, these robes were devised independently in High Chalcis, in the Highborn territory of Reikos, one of the greatest centres of healing known to the Empire. When the two designs came into contact, there was much debate between artisans about their relative merits. Both result in rapid, mana-efficient healing. The Highborn argued that Moonsilver Doublet was superior as the spell could be delivered in the moments after casting, while the Winterfolk felt there were benefits to not having to poke your patient with a stick. Regardless, both designs have spread across the entire Empire and each healer has to make their own mind up on which is more useful.

These robes are sometimes linked to the virtue of Vigilance, as a battlefield healer must be alert to the needs of those around them. In Varushka, these are decorated with goosefeathers or spider web patterns, as a reference to the Virtuous animals of Vigilance. Tower motifs are also common, though it is uncertain whether this tradition is due to the association with Vigilance or with its origins in Highguard.

“It’s a bit bloody fancy, isn’t it?” Landskeeper Edith said, inspecting the garment on the tailor’s dummy before her. She’d come down from the Overton hills to Tassato to find a tailor who could sew her a Moonsilver Doublet. Once she’d seen the artisan’s wares laid out before her, she’d tried her hardest to specify that it should not be too bloody fancy, but somewhere along the line the Leaguer seemed to have misunderstood her instructions.

The doublet was about the prettiest piece of clothing she’d seen in her life. The dragonbone collar, inset with weltsilver Rhyv and Pallas runes – ‘to create an abundance of healing’; the broken weltsilver lines running down the lengths of the arms; the iridescent gloaming sheen to the whole thing; and as if that weren’t enough, the fact that the whole thing seemed to be woven of cloth-of-bloody-gold: it was as if the woman had tried to make as fantastical a garment as possible just to annoy her.

“Trust me, senhora Landskeeper, it’s all in aid of the magic. Wearing this, and bearing that fine staff of yours, there will be no young lad or lass of your Company who won’t know you when they need healing. And knowing is half the-”

“They don’t need to see me dressed up like that to know me. They know me ‘cos they know me. I brought half of ‘em into the world, and they know I’ll send ‘em out of it again if they ever laugh at me. Wearing this-” she lifted the sleeve, which fell to the side of the garment again with a faint clicking of weltsilver decoration, “-I would laugh at me.”

“Well, senhora, I suppose I could enclose the whole in-”

“I don’t care what you do. I’ve had too many wee boys die on me recently for lack of mana, and I’m already bothering the Navarri to fetch me a boxload from Urizen. I need this thing for the war we’re fighting while you’re down here charging Thrones for cloth-of-bloody-gold. And I need the Regiments to take me seriously, and they’re not going to do that if I look like a bloody statue. Cover it in sacking if you have to. Just finish it, and by tomorrow.”

The artisan was taken aback. Such people as this Landskeeper were not many to the Crown in the League. Then again, if she had been losing people in battle as she said, no wonder she was in a bad mood. “Of course, senhora, I...”

She didn’t have time to finish. The Marcher had marched off already.

The artisan sighed, took a moment to admire the fine handiwork that would now have to be concealed from all public viewing, and went off to shout at an apprentice. That always helped her mood.