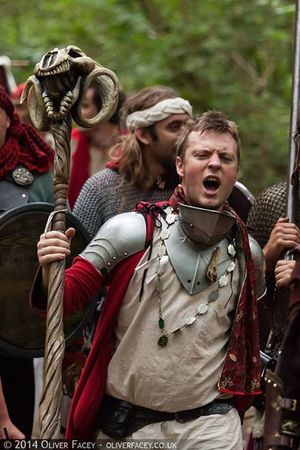 Yasen Otecovna Zlata of the Fellowship of Tangled Thorns

The Sanguine Staff taps upon the power of the realm of Spring to enliven the bearer with additional ritual power. These ritual staffs are employed throughout the Empire to fortify the abilities of Spring ritualists. Commonly, the staves are made of natural materials - the best sanguine staffs are created from living branches or even small saplings, kept alive and fruitful by the complex enchantments worked into them.

There are very few known artefact Sanguine Staffs; the idea of permanently binding the magic of spring into a static form is one that many artisans find troublesome. Traditionally, at the end of the year a Sanguine Staff is ceremonially buried or burnt - releasing the primordial powers safely. There are occasional stories of these staffs exploding violently when shattered or broken - especially where the staff has been used extensively with the more destructive rituals such as Foam and Spittle of the Furious Sea or Thunderous Deluge. Others talk of the staff rupturing and bleeding as if it were a living thing.

Some artisans attempt to focus the uncontrollable energies of the Spring realm in a certain direction, often by including only one of the Runes of Spring. Those who want to encourage the wielder of the staff to focus on healing or strengthening, often combine the Rune of Blood with the Rune of Dominion - causing some to call the staff a Scythe of Spring or Scythe of Blood. Some artisans take great pleasure in employing the Rune of Storms, however, ignoring that sigil's negative connotations and creating a Staff of the Tempest. Finally, in the Marches especially, a staff is crafted with the Rune of Fertility, and used extensively in magic that grants virility or encourages good crops. Such a staff is sometimes disparagingly called a Farmer's Staff or - somewhat lewdly - a Ram's Rod.

Staff of the Archmage

The staff of the Archmage of Spring is a version of the Sanguine Staff crafted to a secret pattern, and grants twice as much power to the wielder. Unlike most such staves, the same staves are reforged each year leading some to be concerned that the ritual implement wielded by the premier Spring magician in the Empire might develop dangerous, hidden flaws.