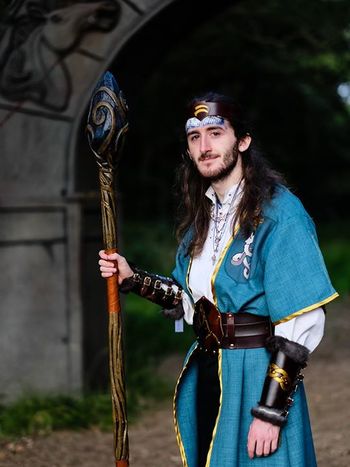 A "Staff of Power" provides a straightforward reserve of additional magical power.

While a staff of power is sometimes disparaged but offers a straightforward reserve of additional power to any magician. As the Hakima Zacarias i Guerra said during an argument with Tiberius of Sunspire, "For the price of one of your staffs, magus, I can give a staff of power to both my brothers, and still have enough left over for a stormcudgel with which to beat you." For this reason they are more generally found amongst those people who value magic less than martial prowess.

A staff of power often bears the six Dawnish symbols of the Realms, worked in with orichalcum or carved along its length. Alternatively, the haft itself may have the form of a hexagonal prism (with rounded grips for the hands, of course), or a hexagonal weight at the casting end. A staff with this form, whether carved with the Realm-Runes or not, is known as a Staff of the Six Realms, after a very ancient example which actually predates the development of the Staff of the Magi, and which therefore represents the pinnacle of achievement in this field in its day. The original Staff of the Six Realms is long-since lost, disappearing in the shipwreck that killed its owner, Polonius of Coppermount Spire, in the Bay of Catazar in the second century B.E.