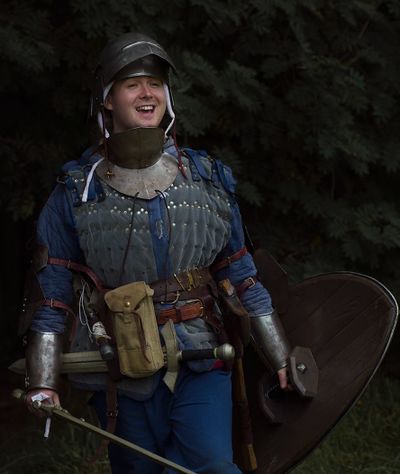 A simple form of light armour that has been responsible for saving a great many lives. The Stoutheart Gambeson is one of the simplest forms of magic armour to create, but very time consuming. The jacket must be carefully quilted over a period of many weeks, and any error in the process may require the artisan to start all over again. Dawnish witch weavers and Marcher artisans alike carefully dye and colour the stoutheart gambesons they craft to show the heraldric colours or livery of the noble house or household for which they are intended, while among the Navarr and Winterfolk, light leather hauberks bearing protective runes are worn by scouts who want to range some distance from their allies.

In some parts of the Empire these items are given as gifts to soldiers or warriors whose families cannot afford more powerful magical protection.

John Miller grabbed the healer roughly by the elbow. He was a big lad, and though he was tired near to falling-down, his eyes burned beneath the soot and the blood.

"Tha'll come with us now, healer." He growled, dragging the shorter man a few steps towards the trees.

"There's no hope John!" Another yeoman in the same livery took hold of John Miller's shoulder, tried to get his attention, He shook her hand off, shook his head.

"Tha doesn't know that for sure, Jenny." He said. "Millers're hardy sons, it'll take more than orcs to put us in the soil."

Wade hurried to keep up, her concern for her comrade outweighing her fatigue and her own pain.

"It's been what, ten minutes now John? John? John! It's the living we need to worry about now, your brother doesn't want you to die looking for his body, we'll make sure he gets buried but ... John!"

John Miller was stubborn, and would not back down. He strode on, without really listening, dragging the healer. A couple of beaters looked over, began to move in their direction, sensing trouble. John dove into the trees, about where he had seen his brother's go down. A tangled mess of yeomen and orcs, with a couple of opportunistic crows already picking over the corpses.

With a bellow, John scattered the crows. He looked about, wild now, on the verge of one of his famous rages. "Wade!" he shouted, his throat hoarse, his voice broken with anguish and despair and faint hope. "Wade tha bastard! Where are tha Wade!"

He dropped to one knee, tears streaming down his face, and beat one fist against the ground. The healer put his hand on his shoulder, reached into his bag for something to take the edge off the pain, but then Jenny held up a hand..

"Do you hear that?" she asked, incredulous. From underneath a pile of orc bodies ... something. Faint, but there it was again a little louder.

John roared, jumped to his feet, started pulling the still-warm bodies of the barbarians aside. Beneath the slaughter mound, a human figure. His skin was ashen white, his face sodden with blood, his eyes closed ... but they flickered open. The healer swore, and pushed John out of the way, immediately taking charge of the situation.

"You Miller men really are hard to kill." Jenny said in awed tones, warning the beaters away with a shake of her head. They observed for a second, then went back to their business, now they could see there would be no trouble. As the healer patched Wade Miller together, he muttered about miracles.

John Miller laughed then, through his tears. His hand went to the tough material of the pale green gambeson he and his brother wore beneath their heavy steel chain. A gift from his mother, the fruit of many weeks hard work, painstakingly sewn and quilted as she watched her sons come of age and prepare themselves for war. He'd been a little embarrassed when he and Wade had arrived at the muster wearing the padded jackets, felt relieved when the Steward outfitted them with 'proper' armour. But now he silently thanked his mother for it, for her foresight and her hard work.

While he and his brother were tough, their mother's love made them well-nigh unkillable.
Retrieved from "https://www.profounddecisions.co.uk/mediawiki-public/index.php?title=Stoutheart_Gambeson&oldid=56669"