The Thrice-cursed Court (Redirected from Surut)

The Thrice-cursed Court (Redirected from 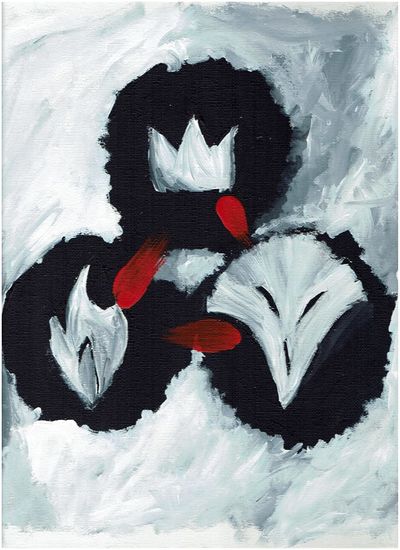 The Thrice-cursed Court are bound together by ties of bitterness and spite.

Most commonly, the Court are called "The Three" or sometimes "The Bound."

Individually, the three known members of the Thrice-cursed Court are Tharim, Skathe and Surut.

The Thrice-cursed court are rarely encountered individually - when they are found alone it is usually because they are conspiring in some way against the other two.

Servitors of the Thrice-cursed Court are often tormented and tortured, flesh mortified or scarred, and are usually in constant pain. Even their favoured courtiers are broken or twisted in some fashion, either in body or mind.

As a whole, the Thrice-cursed Court strongly exemplify the ideas that power comes at a price, and that spite and malice can be dangerous forces. They deal in curses more than any other eternal, crafting specific curses for angry sorcerers and helping petitioners to lay curses over those they hate.

More than many other eternals, the Thrice-cursed consider themselves bound by their word. While they may seek to frame agreements in such a way as to place the other party at a disadvantage, once the agreement is struck they stick to the word and the spirit. Woe betide someone who does not keep to their side of the agreement - the Thrice-cursed view treachery as an unforgivable act that can only be repaid by a lifetime of suffering and torture.

The Thrice-cursed generally hate beauty and purity. They are suspicious of anyone who appears to have no personal agenda, and expect everyone to be as conniving, ruthless and ambitious as they are. They are known to actively oppose unselfish, altruistic people and groups preferring that everyone looks after themselves and the people who 'belong' to them.

There are also stories that Sorin was once part of the Thrice-cursed Court. According to these rumours, Sorin was cursed with an insatiable hunger but managed to escape the curse, and the Court, by passing his curse onto the draughir lineage. Modern scholars point out that this is actually nothing more than anti-draughir propaganda, and makes no sense. Sorin himself refuses to comment on it, and the Thrice-cursed Court give inconsistent replies when questioned about it.

Nobody really agrees on who cursed the Thrice-cursed Court. They have appeared in their current forms since they were first encountered by the Dawnish enchanter Mellisande de Cullwich a century before the formation of the Empire. There is some evidence that they have been known in other parts of the world much longer than this, especially in the Sarcophan Delves.

In the past they have been shown to be eager to help in the creation of winter regio, although the prices they demand are usually very steep and the regio themselves tend to be tainted with the curses of the Court.

They are said to be able to destroy anything that is brought before them, and to be able to kill anything that has ever been alive. Between the cruel intellect of Tharim, the malicious knowledge of Skathe and the irresistible strength of Surut it is said that nothing can resist their efforts to bring it to its ending. They are known to take great pleasure in destroying beautiful or precious things, and one of the few boons they will offer for free is the absolute destruction of something irreplaceable.

The Court are considered relatively easy to manipulate, as long as one is cautious of their fractured personalities. They are known to be especially jealous of other Winter eternals, and seem to take great glee in thwarting them and rewarding those who steal from or confound their eternal peers. 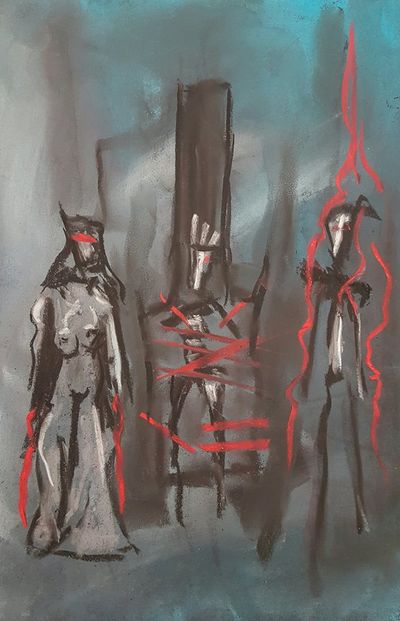 The court are tied together by bonds of hate and jealousy.

The Bound King
Appearance: The Bound King is a pale, corpse-like humanoid with inhuman features wearing fine blue robes and a tarnished silver crown. Tharim is usually seated, and is always wrapped in chains. He is immobile - he can speak, and turn his head a little, and can move the fingers of one hand a little, but that is all.

Concerns: Like all the Thrice-cursed, Tharim is believed to desire freedom from his curse. He is described as being arrogant beyond belief, and utterly cold-blooded. He can demand unspeakable acts with icy detachment, and even his fury is cold and measured. According to some scholars, Tharim's true curse is that he has no empathy for other creatures - it is his heart that is bound, not his body.

While he is immobile he is not without power. He can speak words of such cold clarity that they drive those who hear them to their knees, as well as paralyse or cause unspeakable agony. While he cannot move personally he is said to be able to travel magically between thrones in many places, solely through the effort of his cold will.

Tharim makes little effort to disguise the contempt he feels for the other member of the Thrice-cursed Court.

Boons: In addition to the boons offered by the Court as a whole, Tharim can offer physical endurance and fortitude to bargainers, but as with the ritual Pallid Flesh of the Dead King, such physical strength usually comes with additional weakness. The Bound King is also said to be an expert in binding and constraining supernatural creatures such as sovereigns.

The Hag Queen
Appearance: The Hag Queen is a monstrous, corpse-like humanoid with inhuman features. She wears tattered finery and wields a sceptre-like rod. She is very ugly indeed, and the nature of her curse means that her appearance changes constantly. Even more than her outer appearance, she is spiritually ugly - she is malicious, hateful, spiteful, envious and unnecessarily cruel.

Oh, look at you with all your compassion - but it couldn't save the people you love, could it?

Concerns: Like all the Thrice-cursed, Skathe is believed to desire freedom from her curse. She is described as manipulative, deceptive and wicked, and more than any of the others she despises beauty and purity. She cannot resist malicious behaviour, and sometimes undermines her own plans with her drive to exact petty revenge on those she dislikes. According to some scholars, Skathe's true curse is that her outer form reflects her soul - that were she able abandon her malice and spite she would be revealed as a great beauty.

Skathe carefully conceals the contempt she feels for the other member so the Thrice-cursed Court, and often plays Tharim and Surut against one another.

Boons: In addition to the boons offered by the Court as a whole, Skathe offers enchanted items as gifts. These gifts almost always involve a double-edged curse of some sort - for example she once gifted a League magician with a mirror that helped him to spy on his rivals but which slowly drove him mad by encouraging him to dwell on the inevitable advance of old age and death.

Skathe is also the magician of the Court, and knows horrible rituals and dark spells that delve into the darkest parts of the Winter realm. She is known to be extremely jealous of Wise Rangara and often demands that a petitioner steal something from that eternal before she will offer her own magical assistance.

The Charred Prince, The Ashen Knight, The Burnt Steward
Appearance: Surut is a warrior in heavy armour, usually with a two-handed sword or axe. He is hideously scarred, burnt from head to foot. Sections of his skin are missing, and he appears to be in constant pain. As with Skathe his appearance shifts over time, as new injuries appear. Likewise his armour varies from encounter to encounter - most often in recent times he appears as a Marcher steward.

Concerns: Like all the Thrice-cursed, Surut is believed to desire freedom from his curse. He is described as consumed with anger, hateful of those with whole bodies and souls, and bloodthirsty in the extreme. He is likely to suggest frontal-assaults against anything that gets in his way, and encourages both warriors and politicians alike to be utterly ruthless in pursuit of their goals.

Despite generally being given a lower station that Tharim or Skathe, Surut seems to hold equal rank within the Court while at the same time choosing to act as their strong arm and enforcer. The Charred Prince seems the most conflicted of the Court, sometimes descending into maudlin self-pity. It is in such moods that he is at his most dangerous - while he may agree to deals he might otherwise dismiss, his mood may shift to bloodthirsty slaughter at a moment's notice.

Boons: In addition to the boons offered by the Court as a whole, Surut can offer martial prowess and sometimes loans one of his enchanted weapons or suits of armour to a bargainer. He is also known to possess a box into which he can seal another person's empathy and conscience for a time, which he tends to view as a boon rather than the horrible curse it generally proves to be.

According to some scholars, Surut can wield or offer deadly powers of unleashed destruction against fortifications and even enemy armies but rarely chooses to do so. On at least one occasion, stories tell of Surut providing aid to the cabalists of a beleaguered vale; they gained the power to burn undead husks to ashes with their staves, but at the cost of permanent burning wounds.