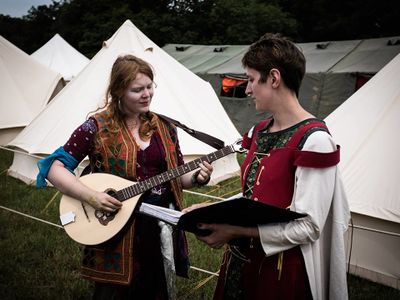 A Dawnish priest who brings glory to the living and the dead.

A troubadour is a Dawnish priest who uses poetry, storytelling and song to recount the deeds of glorious heroes, both living and dead.

There exists an informal relationship between troubadours and the people, and generally fairly little ceremony between them. The tales recounted by troubadours often include reference to their hero or heroine's mistakes, follies, and even defeats before they reach the conclusion. A good troubadour wants their audience to identify with the subject of the verse and if they romanticize the tales a little, the goal is to make their subject seem glorious, not perfect.

Troubadours in the largest Dawn houses tend to study the history of their house's own heroes alongside the tales and legends of the paragons. The best are adept at creating recitals that leave the listener in no doubt about the divine provenance of the house's heroes. Some in the Imperial Synod consider this mix of personal history with official canon to be nothing short of blasphemous, but the Dawnish vigorously defend their traditions and their troubadours are careful to avoid ever explicitly claiming paragon status for a hero without the sanction of the Synod.