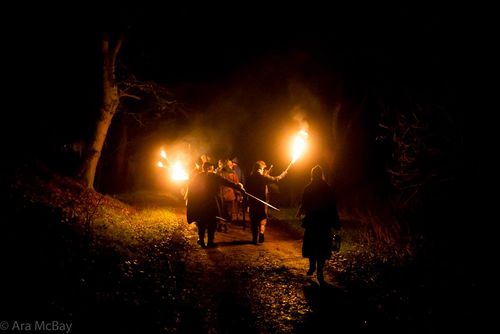 No Varushkan would travel by night ... not unless there was no other choice.

Without the roads that criss-cross Varushka, it would not exist as a Nation but as a series of slowly declining, isolated settlements in a sea of darkness. The Vard built the first roads, connecting their settlements and allowing for trade and the movement of troops. Since joining the Empire, good quality roads have become more widespread, carving out safe passages through the deepest wilderness.

Building a road in Varushka is a task that involves dozens of workers and the soldiers to protect them. Roadbuilders follow traditional methods to lay out the roads, and every hundredth stone is marked with a warding sigil. This hearth magic grants the roads in Varushka powerful protection. The Wolves of the forest cannot step onto the stone of a properly constructed Varushkan road, and on rare occasions merely touching the road may harm them.

Some of the major roads of Varushka are also Navarr trods - ancient roads walked by the Navarr for time out of mind. The Navarr and the Varushkans cooperate on keeping these roads maintained and clear. The power of the Trods combined with the protective sigils of Varushka make these the safest trade routes to other nations.

The value of roads is mitigated slightly because the horrors that lurk in the shadows under the trees have learnt that roads mean people. Some monsters lurk near roads, trying to lure unwary travellers “off the beaten track” to their doom.

Your character is usually safe in Anvil, which is far from the Varushkan wilderness. However it can still be fun to roleplay the Varushkan habit of staying on the roads or paths wherever possible. It's perfectly appropriate to go out of your way to avoid straying from one of the main paths or just to act a little nervous if you have to leave the safety of the road behind.

If your character travels via the Sentinel Gate to Varushka at any point during a summit and you're in a wood with a clear path then you should be very wary of leaving that path, no matter what inducement lies just off the beaten track. Remembering the vital protection that this hearth magic provides could be the difference between life and death.