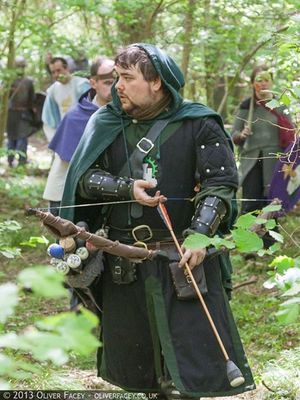 Zarephath, Unconquered of the Shattered Tower

Elite scouts, hunters and skirmishers have used these bows since humans first learnt to stalk their prey through the woods and across the snow and the grassland. They take their name both from their use by rangers, trappers and pioneers who spend long periods of time in untracked wilderness, and from the elite battlefield archers who use them to solve problems by delivering sudden death with pinpoint accuracy to their foes.

In the League a Wayfinder is most commonly called a Waymaker, referring both to its us in solving problems and from the tendency of opponents to get out of the way when threatened with a loaded crossbow.

In some parts of the Brass Coast, Freeborn bowyers plant a tree when a child is born. As the child ages they encourage the child to tend that tree, and when the tree and child are both ready, they craft a bow from the wood of the tree and enchant it as a Wayfinder. The bond between tree and archer is strengthened over time, and is widely believed to result in bows that are ideally suited to the hand of the archer who wields them. A similar tradition was observed by the master crossbow makers of the League city of Holberg, but the hardwood groves they favoured were burnt when their territory fell under barbarian sway in 346 YE.

Grant o’ the Woods was only a little out of breath as he jogged along the wooded valley back to the Imperial camp, but it disappointed him a little. The days when he could jog from dawn till dusk didn’t seem too far behind him, but behind him they were. Harry Bold, Captain of the 19th Upwold Light Infantry, would never say anything, but he’d tut, and maybe shake his head, and that’d be all that needed saying.

The old beater had scouted out the Feni camp, and spent the night out on the hillside opposite, counting their numbers. Those pig-ignorant thugs had no idea how to hide, nor how to spot a hidden man, and he’d pinned them at just over two hundred, maybe forty of them too young to be fighting. The camp wasn’t a raiding-clan’s camp, but a homestead of sorts, and what Harry didn’t realise – because he didn’t have Grant’s experience watching the buggers – was that he would escalate their raiding into a full-scale war if he destroyed it.

Unenviable though it was, it was now Grant o’ the Woods’ job to tell a Marcher general to stop hunting the Feni. To pull back, reinforce the nearby homesteads, and simply hit their raiding parties hard enough to scare them off. A complexity of tactics worthy of a fancy-pants Leaguer, he thought with a grin.

Of course, it’d be a damn sight harder if he didn’t make it back.

They always sent scouts out in bands of four or five, just to make sure they won any fights they got into with a Marcher beater, the latter being invariably better-trained and far better-equipped. It was four of them this time, and the grin fell off Grant’s face as they rose from the underbrush only fifty yards in front of him.

Too busy thinking to spot a Feni. The bloody irony.

They screamed bloody murder as they came, hoping to put the fear up him. Unperturbed, he unslung the bow and nocked it in a matter of seconds, and picked off the first half-naked, screaming savage with a fine shot. The second shot went wide as its target dodged around some obstacle, but the third found its mark, sending an emaciated woman with a dreadful-looking bone axe spinning to the floor.

And then they were on him, and he picked up his own axe and split the third Feni up the middle with a cruel blow.

The fourth just kept coming, as fearless as he was desperate, and Grant wasn’t ready for him. He held a savage, jagged sword in each hand, and he spun as he bore down on Grant, the first scoring a searing line across his shoulder and the second slamming into his layered leather armour with a heavy thump. He raised his axe to block the deadly blows but was beaten to the ground. Grant felt ribs crack and his weight shift as his armour’s straps gave way, and he went down on the floor in a heap.

No. He wouldn’t be remembered for that. Not as just the first Stocklander to die in the massacre. Not as the incompetent who got himself seen and killed. Harry Bold wouldn’t remember him like that. Not the man who’d given him the Wayfinder.

Nor would he have his friend remembered as the man who made the fatal mistake. Fancy-pants Dawnish would’ve called it heroism that got Grant back on his feet. Later, when asked, he’d call it stubbornness.

The next blow was aimed at the back of his neck, and would have taken his head off if it wasn’t for that thought of the Wayfinder. He hurled himself out of the way of the falling sword and grabbed for the bow, which lay where he’d dropped it. It just seemed like the right thing to do. Without hesitation he reached for an arrow; without thought he loosed it. His wounded shoulder stopped him even drawing it fully, but this close, he didn’t need to. The Feni crumpled.

Alive again – in every sense of the word – Grant glanced quickly around, to see if their screeching had attracted any more attention. It hadn’t. But it would. He knew these Feni; he knew how they thought. In minutes, they’d be here.

He wiped the blood off his axe and stretched his aching muscles, rolling his injured shoulder and stretching his ribs to test out their strength. He should have been crippled, barely able to walk, but stubbornness was a hot-burning fuel, and it had him feeling right again in no time. Neither shoulders nor ribs felt great, but they’d do, thanks to stubbornness. For the sake of the man who gave him the Wayfinder, he’d be stubborn, or heroic, whatever they felt like calling him.

The old beater set off at a jog for the Marcher camp again with a more wary eye for his surroundings, and thought to himself, with a wry smirk, that at least now he had an excuse to be out of breath when he met his old friend.
Retrieved from "https://www.profounddecisions.co.uk/mediawiki-public/index.php?title=Wayfinder&oldid=51112"