Why Sulemaine Walked Away From The Baker

Why Sulemaine Walked Away From The Baker 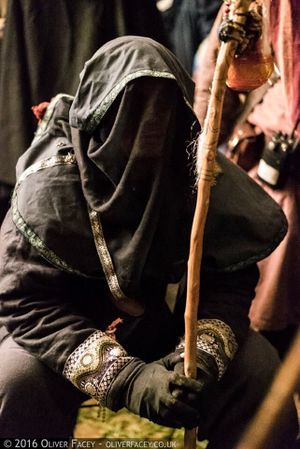 Performing this ritual takes at least 2 minutes of roleplaying. The general responsible for the army (or the egregore if the general is not at Anvil) must be present throughout.

At the completion of the ritual, the general used as the focus for the ritual becomes subject to VENOM. This condition can be removed in the normal way. At the same time, the ritual hardens the soldiers resistance to venoms and infections. The effectiveness of the Fire in the Blood order used by an opposing army in the same campaign is halved against this army.

While the army is enchanted, the general experiences a roleplaying effect: You regularly experience rheumatic aches and pains, stiffness, stomach upsets, and headaches. You regularly catch colds and sniffles. You suffer short-lived pangs of hunger, thirst, fever, or chills that come on you randomly through the day. Furthermore, when you sleep you are prone to nightmare-like dreams of being poisoned, of being in places where you experience crippling hunger or thirst, of being hunted by venomous monsters, or of being forced to endure sickness or bodily infirmity.

These effects are particularly pronounced and disturbing for a character with the draughir lineage.

Sulemaine and the Baker
It is said that one day, long ago, the Sword Scholar Sulemaine turned up at the spire of an Urizeni baker. When the baker came out to greet her she asked him ‘What is it that you wish of life?’ The baker replied ‘To be the best baker I can possibly be.’ ‘Well then,’ replied Sulemaine, ‘I shall return to this spire one year from today and if you do not feed me the tastiest pastry that ever I have eaten then I will cut you in two’ and she swished her sword around dramatically to emphasise the point.

Then one day, a year from her first appearance, the Sword Scholar Sulemaine returned to the spire of the baker and demanded to sample his pastries. Eating one she proclaimed ‘This is indeed a very fine pastry master baker, but it is not the finest I have ever tasted.’ The baker replied ‘I knew it would not be enough, for there is more to such things than the art of the baker and the quality of the ingredients. The tastiest of pastries is made so by the memories that accompany it – baking in the kitchen of one’s parents, the joy of eating one’s first flakey pastry as a child, and so forth. Because I knew it would not be enough I have also spent the last year becoming a supremely skilled poisoner.’ With that Sulemaine laughed heartily, clapped the baker on the back, and finished her pastry. Relieved that he had not been chopped in two, the baker went into his spire to fetch the antidote, but when he returned he found that Sulemaine had walked away.

In his speech to Conclave placing the ritual into Imperial Lore Simargl claimed to have been visited by Sulemaine in a dream and set the task of answering within a year why she had walked away from the baker. The ritual was offered by way of an answer.

The original research that lead to the creation of this ritual was undertaken by Palaphon during Spring 381YE. His original research was eventually codified at the Lyceum under the guidance of the Dean, the Empty One, occupying the attentions of the entire Lyceum through much of 382YE. Work was completed, in spite of threats from the Grendel, shortly before the Autumn Equinox of that year. The name of the ritual changed several times during the process of codification, but in the end the Dean settled on Why Sulemaine Walked Away From The Baker, apparently in reference to some story about the controversial founder of the sword scholar movement in Urizen.

In addition to the work performed by the usual arcane scholars and magical theoreticians, the staff of the Lyceum were granted additional assistance by a number of “friends” of the eternal Sadogua, dispatched by the Brother of Wizards at the behest of the Dean. Most of these “friends” were Imperial magicians normally disinterested in academic pursuits, primarily from the Brass Coast, Wintermark, and Navarr, but included a handful of actual heralds of the Father of Bats. With their assistance, the ritual was codified significantly more swiftly than would be expected for such a powerful enchantment.

The ritual has a profound effect on the soldiers of the army on which it is cast. While their general is wracked with minor aches and pains, unseasonal colds, and bad dreams the soldiers feel hale and hearty. They do not become sick, and prove especially resistant to poisons and venoms of all kinds. They can still be crippled by an envenomed weapon, but they recover quickly from anything except a fatal blow. Furthermore, the soldiers find that they can eat almost any food without becoming ill. In a manner similar to a draughir, they can consume stale bread, brackish water, or spoiled meat without ill effect.

While it is not traditionally seen as a resonance of the Winter realm, the concept of suffering is closely tie to the Eternal Sorin. Yet to cause suffering in another without a purpose is merely cruelty. While the Winter realm can be cruel this does not mean that all suffering is cruel in its nature. For Sorin, and for some scholars of the Winter realm, suffering is a means to an end. By enduring privation – hunger, thirst, exhaustion – an individual can be come inured to the effects. By exposing the general to venom, they symbolically pass the ability to endure that venom to their soldiers.

The ritual draws on two key resonances of the Winter realm. The first is survival - the urge to live is a powerful instinct, enhanced by Winter magic. The realm is effective at weaving enchantments such as Unyielding Constitution or Fight Tooth and Nail that help the beneficiary endure pain. The enchantment of Why Sulemaine Walked Away from the Baker draws on this resonance specifically to allow the soldiers effected by the magic to survive the effects of venom, poison, and disease.

The other key resonance utilised in this ritual is that of preservation. For all the darker powers commonly associated with the realm, Winter has a predilection for keeping things as they are – for opposing change even if it leads to stagnation. In the case of this ritual, in keeping with the resonance of Survival, the Winter magic works to preserve a state of “good health” in the target. It should not be taken to mean that Winter is adept at healing, or would be as effective at creating an enchantment to allow one to endure wounds. Rather, the idea of Preservation is tied somewhat to a third resonance: weakness. Normally, the Winter Realm is preoccupied with ageing and especially with the weakness and infirmity that comes from old age. Yet the magic of weakness need not be solely aimed at a mortal body. Winter magic will also weaken objects and structures. In this case, the weakness is aimed specifically towards the poisons, diseases, and venoms that attempt to overcome the soldiers of the army.

The ritual resonates with the theme of the endurance that is mastered and tested through suffering. As such, the general who is he focus for the enchantment may be threatened with privation, torment, or injury by the coven; they are expected to remain stoic throughout enduring the descriptions of suffering without flinching.

The Dean originally suggested that the ritual should require an invocation of Grandmother Winter, Clever Spider. Other totems might also be appropriate, especially those known for their great strength or endurance – the stag, the bear, or the boar.

Some experimentation with astronomancy suggests that the Oak and the Stallion are both good constellations to use with this ritual.

Additional text about Sulemaine from The Empty One