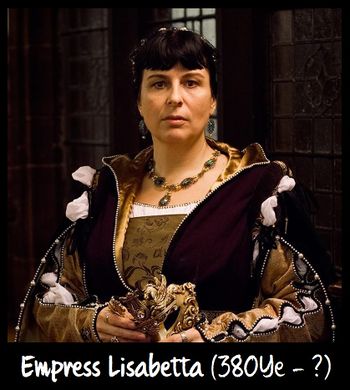 Their Imperial Majesty, Empress Lisabetta Giacomi von Holberg of the House
of Seven Mirrors, twentieth Throne of the Empire

In each case. we've tried to tag the Winds of Fortune entry with the nations, or political bodies, to which it is most relevant. We've done this to help people who are interested only in events that are especially relevant to them. In no way are these tags intended to be exhaustive; the Empire is a complex place and very little happens in isolation.

Without further ado then.

A Banner of Thorns

The Black Thorns are in Liathaven, fighting to reclaim the Navarr territory from the Jotun. Their presence suggests certain opportunities for the Navarr, and perhaps for the Empire. You can learn about them here.

The nameless red star is getting larger in a deeply worrisome fashion. The Phoenix has faded so badly it is starting to get difficult to remember quite why it was so important; and over Skarsind, Holberg, Bregasland, Segura and Necropolis the stars are going out ... You can learn about these three peculiar celestial phenomena here.

Curses. If you are an inhabitant of Astolat (especially one with a military unit), Tassato (especially a magician), Casinea (especially a farmer), or Redoubt (especially the owner of a massive castle), you probably ought to read this page.

When the Grendel launched their cowardly sneak attack on Sarvos, they looted many priceless treasures. One of their targets was the tomb of Empress Giselle at the Alvetti estates. They robbed the tomb, but the true prize - the body and personal effects of the Empress - were saved by Imperial heroes. Now, on the eve of the coronation of the twentieth Throne, a decision needs to be made about where the sixteenth will be laid to rest. You can learn more about this situation here.

The Prime Colour of the World

The Hallow of the Green World has been raised over the Empire by the Sherard Hunters of Wintermark. Its touch is felt through all ten nations, but it has had a particularly profound effect on Holberg. You can learn about it here.

A Question of Provenance

In addition to everything else going on in Reikos, decisions about how to deal with the more esoteric plants and fungi growing in the territory need to be made. The onus falls on the Imperial Synod, and you can learn more about the situation here. You can also learn about the general situation in Reikos here, and about the influence of Golan and Yael here.

A Season of Mushrooms

A wave of transformation is sweeping across Reikos as the eternal Llofir is unleashed. You can learn about some of the extremely peculiar goings on in Reikos this season here. You can learn more about related incidents here and here.

After the failure of the Autumn harvest, after the defeat in the Mournwold ... the Spring planting fails as well. The situation is grim in the Marches, but sometimes it is when you are tested the most that your true mettle becomes clear. You can learn about the curses - and opportunities - available to the Marches here.

A team of Torchbearers led by Livia Cascade, the Seer of the Gateway, has spent the time since the death of the Empress Britta recording accounts of past-life visions witnessed by citizens of the Empire. Recently, these accounts have been published across the Empire for the first time by a publishing-house in Redoubt named the Spider's Vantage Spire. You can learn about these publications here.

The spires of Zenith are in significant danger from two supernatural threats. A former warmage and guest of the Spire of Twisting Shadows - Nazares by name - is binding the spirits of Winter into the corpses of the newely dead as part of a deranged "crusade" that appears to require the "recruitment" of every human on orc in the territory. at the same time, a pall of unendurable sorrow spreads slowly from the ruins of the devastated Spire ... with potentially disastrous consequences. You can learn more about the situation in Zenith here.

The question of whether to hold a Symposium has been laid before the Imperial Synod. More than just a meeting, a Symposium could be an opportunity to freely and openly address questions of concern for the faithful, or a chance to reaffirm the orthodoxy of the Imperial Way; it could be a chance to learn more about heathen faiths, or a gathering of like-minded individuals wishing to forge stronger bonds in the face of heterodoxy and heresy. Assuming it takes place at all - and you can learn more about what that might mean here.

Temple of the Bull

The Imperial Senate has given permission for the Asavean priests of Balo of the Foam and the Black Bull to build a temple in the Empire. Construction is underway, and now the Asaveans wait with interest to see if the Synod will accept their invitation to build a temple in Nemoria. You can learn about this - and about certain opportunities of dubious legality available to the Synod - here.

There is a new Throne! Empress Lisabetta Giacomi von Holberg was appointed during the Spring Equinox, and will be formally crowned during the Summer Solstice. You can learn more about her, about The Throne, and about the upcoming coronation here.

The eternal Meraud's challenge to the magicians of the Empire (which you can read about here) has ended. The Summer Magician is expected to announce the victor, and deliver the promised boon - a powerful magical staff - during the Summer Solstice. There is also talk of an "enchantment on the Imperial regio" but the details of quite what that will entail are unclear.

The Icy Crag of the Eternal Sun

Work on The Icy Crag of the Eternal Sun, the Summer college built near Volchitrava in Miekarova has been completed. Infused with the power of the eternal Cathan Canae, who serves as its patron, it has already begun recruiting theorists, scholars, and students from across the Empire. The first Master of Ice and Darkness will almost certainly be selected during the coming summit - any Imperial citizen can present a Declaration of Candidacy to the Imperial Conclave in an attempt to secure the position.

Fog on the Brine

The eerie fog that clings to the waters of the northern Bay of Catazar persists - save in Sarvos where it has been seared away by potent Day magic.

The night skies above Madruga, Zenith, and Tassato have continued to appear strange for the last three months. Magicians agree that this is caused by Drawing the Penumbral Veil. Shortly before the Summer Solstice, however, the eerie effect of the shrouds over Madruga and Zenith begin to fade, with several nights of normal skies until eventually the shrouds have disappeared entirely. The shroud over Tassato persists - for the moment at least.