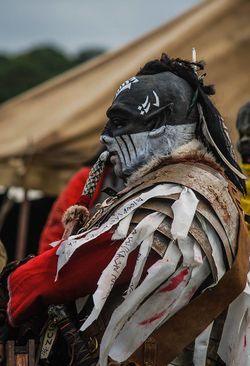 The Advisor advises on both Imperial and barbarian orcs

The Advisor on Orc Affairs is an Imperial title created by the Imperial Senate in Winter 376YE and amended in the Spring Equinox of 379YE.

The first Imperial orc advisor was appointed at the Autumn Equinox in 377YE. Even before that appointment there was some controversy; when the position was first suggested, the magistrates were concerned that there were extensive constitutional problems with the title. "It is the magistrate's opinion that this motion is unconstitutional as the primary purpose of the senate is to represent the citizens of current imperial territories. The Imperial Orc nation does not currently have any territories. Furthermore it is within the existing powers of the senate to call someone to address the senate with regards to a particular motion." Following a full investigation of the matter by the Constitutional Court, these concerns were overturned - comparison was made with the Master of the Imperial Mint. As there was no attempt to give the Advisor any ability to vote or raise motions, the constitutional concerns were assuaged.

Prior to the establishment of the orc territory of Skarsind, the Advisor was appointed by unanimous decision of the Imperial Orc generals; if they were not unanimous, the only alternative was for a vote of appointment by the Imperial Senate. With the assignment of Skarsind, and the nation now having the ability to appoint senators, the appointment mechanism defaults to the standard method of appointing national Senate titles.

The Advisor advises the Imperial Senate on matters relating to the orcs, both Imperial and otherwise. While they cannot raise or second a motion, nor vote, the Advisor is able and expected to participate fully in the debate that surrounds any Senatorial decision.

Irontide Bruk, who held the title of Advisor on orc affairs until his tragic
death in 379YE.

The Advisor on Orc Affairs is a member of the Senate. They are entitled to enter the Senate chamber at the start of a Senate session and participate in the debates. They do not have the power to raise motions or to vote on a motion.

The Advisor on Orc Affairs has the right to make an address to the Senate once per summit. This is intended to allow them to present issues or concerns relating to the orcs. To use this power, the Advisor informs the Civil Service that they wish to address the Senate. Their address will be added to the agenda for the next Senate session.

This title is currently held by Bloodcrow Yargol; it will be reelected at Spring Equinox 384YE. The table to the right shows the citizens who have been elected to hold this title in the years since Empress Britta died.