Anathemic Call of Bug and Briar

Anathemic Call of Bug and Briar

Performing this ritual takes at least 2 minutes of roleplaying. At the end of the ritual one of the contributors is chosen to deliver the curse with a pronouncement of doom. 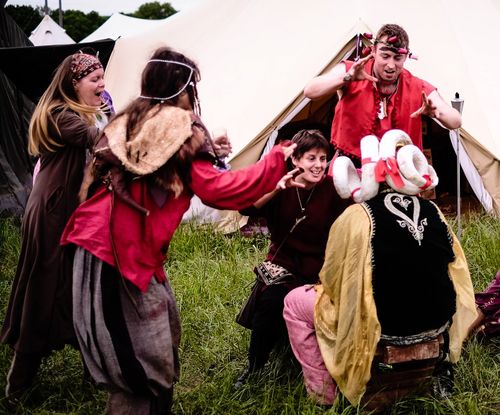 This curse fills the victim's life with biting insects and parasites.

This ritual creates a curse that is delivered to a target with a pronouncement of doom: one contributors is chosen to deliver the curse, and they must do so within fifteen minutes or it falls on their own head.

While under the curse, the target experiences a roleplaying effect; they often suffer from itchy skin, and are regularly targeted by biting or stinging insects when they are in a natural setting.

While under the curse the target loses half of any production that would have been provided by a farm, forest or herb garden resource.

The additional production provided by an enchantment such as Rampant Growth or Gathering the Harvest is not affected by this curse.

The curse can be removed by certain powerful creatures or items.

This curse focuses the fecund energies of the Spring realm onto a target, and through them onto their resources. Insects and parasites breed with frightening speed around them, and uncontrolled fertility causes rhododendrons, briars, weeds and fungi to breed at supernatural speed, overwhelming the valuable vegetation that their wealth relies on. It makes little difference if the target abandons their farm, forest, or herb garden - within a few days the same unnatural growths begin to overwhelm their new resource.

Several eternals of Spring are known to have the power to remove this curse - and to deliver their own variants of it - especially Yaw'nagrah and Llofir. Unfortunately, both are more inclined to encourage the curse than to discourage the supernatural growth it causes; it generally requires a great deal of effort to encourage them to assist. By contrast, some eternals of Winter (notably Kaela) are more than happy to help remove the effect... but this rarely leaves the resource in question any more productive.

During the Spring Equinox 381YE, then-Archmage of Spring Rosamund Holt raised a Declaration of Concord suggesting that the common name of the ritual was "stupid" and should be changed. The Imperial Conclave agreed.

As with many curses, this ritual often involves a recitation of the grievances against the target, casting aside food or forest resources, invoking the rune Bravash, or calling on the names of eternals such as Yaw'nagrah or Llofir.