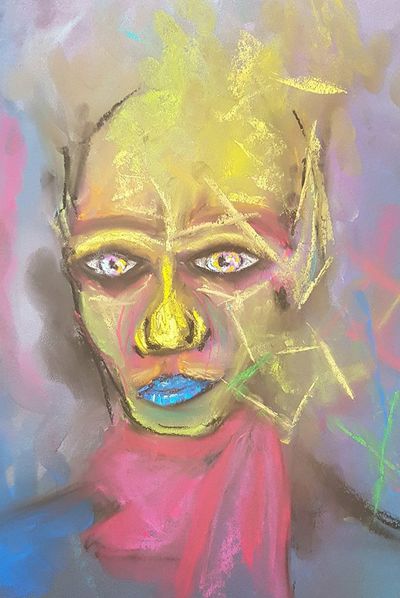 The eternal is usually known by heralds and magicians as the Azoth, although it generally refers to itself as simply "Azoth".

Other monikers include the Crucible, the Rebis, and the Great Work. It is likely that the eternal will accrue further names as it continues to interact with mortal magicians.

The Azoth's true form - inasmuch as Night eternals can be said to have such a thing - is unknown at this time. It is likely that as with Murit and Soghter, the Azoth is a winged serpent like Sung and Lashonar, as opposed to a wyrm like Janon or Sadogua. As with all the eternals of the Night realm, the Azoth is a shapeshifter - capable of taking on any form it desires.

When it assumes humanoid form, it has shown a marked preference for an orc-like appearance, albeit one with at least one unfamiliar element such as feathers, multicoloured scales, or even horns. It seems to favour multicoloured silks, although there are also reports of more martial elements similar to those of a Jotun ghodi - albeit with a richer range of colour than traditional for the western orcs.

The Azoth is the eternal union of Murit and Soghter into one being. Some Imperial scholars believe this is only another stage in an eternal cycle of union and division. If they are correct, at some point far in the future Azoth will split into Murit and Soghter once again - but for now those two Eternals have effectively ceased to exist. Fundamentally, the Azoth is an Eternal of change and transformation, combining elements of both the Shaper and the Changer of the Ways to create something entirely new.

Mortal magicians are still learning about the nature of the Azoth, but it has mentioned "four principles" or foundational concepts that apparently shaper its understanding in some fashion. While the precise wording changes from encounter to encounter, it seems the Azoth is concerned with exploring and mastering these ideas. The first principle is "learning through experience" - seemingly an element of Soghter that deals with individuality, transformation through experience, and practical activity. The second principle is "transcendence through alchemy" - the refinement of the self and the world by occult alchemic principles. This refers not so much to the potions brewed by an apothecary but to the profound changes enacted with potent Night magic. The third principle is "inspiration through madness" - a complex concept that seems to embody the idea of setting aside limitations or overcoming barriers without being chained to tradition, reason, or ethics enforced by hidebound society. The final principles is "expression through creation" - perhaps an element of Murit's influence. This seems to represent the idea that a creator places part of themselves into the things they make, or that creation is the purest form of communication with others.

Transcendant Union
The Azoth is the result of the union of two other eternals, Murit and Soghter. Throughout 381YE Imperial magicans were apparently involved in a sequence of occult challenges with representatives of the Jotun, Thule, Druj, and Grendel to somehow enact the union of the two Night eternals into their new form. Exact details are not widely known, but it is believed that the outcomes of these challenges helped to shape the Azoth in some fashion. These challenges were combined with esoteric alchemical sciences to merge the essence of the two eternals into a single being who emerged into existence at the beginning of 382YE.

As a consequence of their transformation, many boons provided by one of the two "progenitor" eternals have ceased to function, or have undergone significant changes. The eternal itself has not been in existance long enough to provide any clear idea of the kind of boons it can provide. Given its nature, however, it is likely to combine the kind of boons Soghter and Murit may have provided, but with an emphasis on alchemical transformation.

Rituals such as Transmogrification of the Soul's Echo, Distill the Serpent's Stone, the The Eight-spoked Wheel, and The Retrograde Wheel in particular resonate with the new eternal. The ritual Amalgamation of Silver and Gold which creates a unique magical material by combining weltsilver and ambergelt with the power of ilium originated with the Azoth - it certainly appears to have a great deal of interest in substances that can be created only through the use of Night magic.

Like their liege, the majority of heralds encountered to date have had orcish features, usually with an unexpected physical element - multicoloured feathers appear to be quite common. They tend to refer to themselves as being "distillations" of the essence of the Azoth. Each is an individual but also considers themselves a part of their liege that has been "siphoned off" in some fashion and given individuality. They claim to be on a journey of discovery and transformation - one which requires them to return to the Azoth on a regular basis to be further "refined". There are already a few stories of heralds that have transformed significantly between one meeting and the next. Currently, heralds of the Azoth appear to be inexperienced, possessed of an almost childlike naevity. They are fascinated by all the things they come across, learning ravenously, asking lots of questions, and generally being enthusiastic about interactions with mortals of all kinds.

As with the boons of Soghter and Murit, it is believed that many of those eternals' former heralds have undergone significant changes.There are a very few scattered reports of what appear to be individual heralds have echoed the merging of their former patrons, joining in some esoteric fashion with "opposite numbers" in the service of the other eternal to create a new entity. The majority however appear to have simply vanished - or been absorbed in some fashion back into the being of their former masters before the union that created the Azoth.