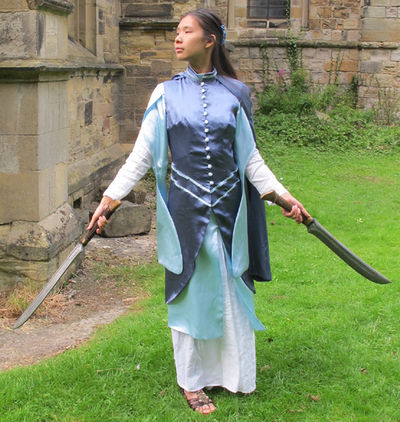 The Brother Blades are most commonly crafted as a pair, whether of swords, axes or hammers. Pains are taken to ensure the weapons are as similar as possible, and traditionally the materials used to create the best of them are taken from the same ore quarried in the same mines. That is not to say that 'unbalanced pairs' don't exist, but they are in the minority. Even unbalanced pairs tend to be similar, save for size, such as a longsword paired with a shortsword in the off-hand. A rapier paired to a stiletto is a combination popular among bravos determined to be armed under all circumstances, sometimes called “Pins and Needles”. So valuable is the idea of the weapons as twins that wielders take great pains to make sure that they remain reflections of each others, ensuring that any decoration of one is mirrored on the other.

It is possible to permanently mark or change the appearance of these weapons; to do so the wielder has one of the weapons altered and then uses their magical power to "copy" that change to the other weapon. This process is unreliable, and is ineffective at copying anything other than cosmetic changes to the physical shape of the weapons.

Means of invoking the pair’s power varies greatly. Navarri paired hand-axes sometimes have oaths impressed into the leather wrappings of the handles, proclaiming the weapons’ devotion to each other, which is repeated by the wielder to restore the shattered twin. All across the Empire, soldiers press together the intact blade with the remnants of its companion and invoke the rune Pallas, which has power over crafted goods.

The Brass Coast trader lifted up the sword, and weighed it in his hands. It was a fine blade, alike to its brother as ordered, and now was the moment of truth. The price had been low, he thought, but he was just finishing a Conquerors’ Sword like the one wielded by his illustrious tribes-mate Jone i Arco and that had taken every scrap of rare stuff he'd been able to lay hands on. On average, he though, he'd make more over three months than if he'd made three common blades. The other side of the tavern table was his customer, known to him, from a nation known to him, and without any of the honesty that the Freeborn would show. Would he press for still lower?

The Temeschwari took the blade. It was, as promised, the twin of the one he'd already had delivered. Imperial horse in gold relief on the blade, red leather hilt. It would match his Merchant Prince's brigandine and robe perfectly.

The Freeborn's hand drifted down, under the table, and wrapped round the reassuring steel of his knife.

"Eight crowns the pair. As contracted. The balance of four is due." said the Freeborn. Amethyst and topaz gleamed on the Temeschwari's fingers as two stacks of coins were pushed over the table: transaction done.

And as the he left, the Freeborn's grip relaxed.