Senator Miroslav, hard at work during a summit at Anvil.

Caricomare is a district of the League city of Sarvos. In 348YE it was devastated by a terrible tempest; in 378YE it was restored and reinvigorated thanks to the generous donations of the citizens and the tireless work of its Senator.

Caricomare was a vibrant trading hub for the empire, famous for its miraculous quays. Ships from across the Bay of Catazar, and the wide world beyond, were regular visitors to the jewelled city and their engagement with League society often began there.

The tomb of the Empress Giselle once stood in the ruins of the Alivetti guild estates here (before being moved to Temeschwar), but the ward was better known as the site of the wondrous Caricomare Quays, a great marvel unmatched elsewhere in the world. The mechanical quays were devastated by the storms that flooded this part of the city. The repairs were considered too costly and the floods created a displaced populace, compounding the overcrowding in the city. Caricomare spent three decades as an abandoned, dangerous place, a maze of flooded streets and waterlogged buildings, but it was said that riches could still be found in the depths, for those brave enough to investigate.

In 348YE, the city was struck by a terrible tempest that did significant damage to many coastal parts of the city and lead to the flooding and eventual sinking of the southern district of Caricomare. Reclaiming the ruined quarter of the city was deemed "too expensive" by the Senate - a move that some bitter Sarvosans believe to have been intended as a punishment for the League and the city of Sarvos in particular, in the wake of the unpopular Empress's death.

It seemed as if Caricomare was doomed to remain a haunted ruin forever. But in 378YE a decision by the Imperial Senate saw the beginning of a major reconstruction effort in Caricomare, to drain the flood and to appoint a Mayor to oversee the district. Thanks to these efforts, the area is once again a thriving district of Sarvos despite thirty years of neglect. Many sections had to built over, using the sunken ruins as the foundations for new structures, but great pains were taken to include as much of the original architecture as possible. The tomb of Empress Giselle in the Alivetti guild estates was one such area; painstaking raised from the waters and returned to its former glory. Other historic buildings have also been raised and restored or rebuilt in their previous image with numerous families and Cartas reclaiming lost property throughout the district.

Some of the sunken roads have been left underwater and cleared of wreckage, leaving simple water ways that serve as canals and as a memorial to those who were lost to the storm. Many of the bridges build to span the waterways are adorned with memorial plaques and mementos. The districts of the Caricomare have been redesigned to keep trade, the districts life blood, flowing smoothly. Wide roads and canals now run through the district from the quayside like the spokes of a wheel, allowing people and goods to get where they need to be quickly. 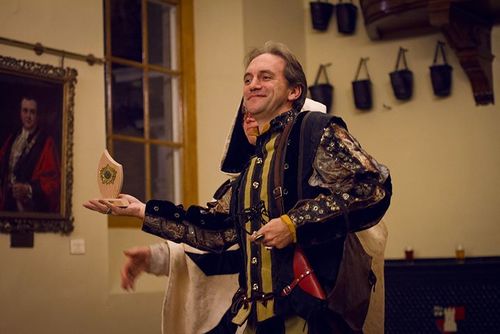 Among the many new additions is the Notturno district, the official home of the Caricomare Night Market. During the day it is another bustling market place, however as the sun sets it really comes alive. Some outrageous claims have been made that the Night Market is lit by more lights than there are stars in the sky, but it cannot be denied that the grand marketplace is an unceasing riot of colours and sounds whether it is noon or midnight. Anyone and everyone is welcome, whether they want to trade, entertain or be entertained.

The quayside is trading again, but the mechanical quays are still too badly damaged to function and whole sections had to be dismantled in the restoration process. Until the docks are fully rebuilt the Caricomare won’t be the trade hub it once was.

An obvious new addition is the gleaming white statue that adorns the quayside depicting Senator Miroslav of Sarvos, who championed the rebuilding in the Senate and now watches over the results of his hard work.

The Mystery of the Shifting Statue

Over the Winter of 378YE, the statue of Miroslav underwent a dramatic, unexpected change. The statue itself was quickly concealed behind a wall of scaffolding and dust-sheets ... but not quickly enough. Gossip initially suggested that the entire statue had warped and shifted like hot wax, changing from a depiction of the proud Senator into an effigy half-goat, half-serpent with twisted features, cloven hooves and impious horns.

Even with a few guards preventing access to the statue, any number of urchins and interested citizens have uncovered the truth - the statue has "only" changed so that the facial features reflect those of a snide naga. Rather than gazing out across the bay, the statue leans slightly forward, whispering conspiratorially behind one raised hand, forked snake-tongue protruding and an expression of malicious glee. Casual examination by magicians suggests this vandalism is not the result of a mundane attack; a weak aura of Night magic could be easily discerned around the sculpture for the first month or so.

The sculptor who was initially engaged to create the statue, Anatrice di Sarvos, has made little secret of the fact that she is not interested in returning to a finished piece and considers the fact that the statue has altered to be "not my problem." In private she has amended this to "not my problem - I've been paid."

The statue remained covered until the Grendel invasion of Spring 380YE. The orcs removed the tarpaulin, and there was allegedly some interest in removing the sculpture as a gift for one of the Salt Lords. In the end, the Grendel left the jewelled city without the statue. Then, during the celebrations following the coronation of Empress Lisabetta, the statue underwent a second marvellous transmutation.

Losing all its ophidian characteristics, the statue instead took on the mien of smiling triumph, and went from whsipering behind its hand to mounting a set of stairs. It now bore an oddly reflective coin in one hand and a lantern in the other. No sculptor claimed credit for the alterations, and so it has been simply chalked up as yet another miraculous occurrence by the residents of Caricomare. Rumours quickly spread - two in particular have proved popular with the citizens of the League.

One says that if you gaze into the surface of the metal coin my moonlight, you can gain a glimpse of your heart's desire - that goal or thing that would be the finest expression of your ambition. The other says that the statue itself measures the fortunes of the Empire (or the League, depending on who one asks) and that where it once suggested dark conspiracies and treachery, it now reflects an Empire entering a new age of ambitious destiny. Indeed, priests who preach the path of Ambition have already begun to congregate in the square on market days, and deliver sermons from the steps at the base of the statue.

With the restoration of the district, the Imperial title of Mayor of Caricomare has once again become available. Responsible for overseeing the district and representing its cosmopolitan citizenry to the Senator; those same citizens trust the mayor to vote on their behalf in the Sarvosan senatorial elections each summer.

Built toward the end of 380YE the Blood Red Quays Art Gallery was commissioned by Magdelena Alanga di Sarvos and paid for by The Bloody Butchers Guild of Temeschwar. In addition to serving as a gallery to display fine works of art, it provides inspiration to, and serves as a source of Pride for, the citizens of Sarvos.