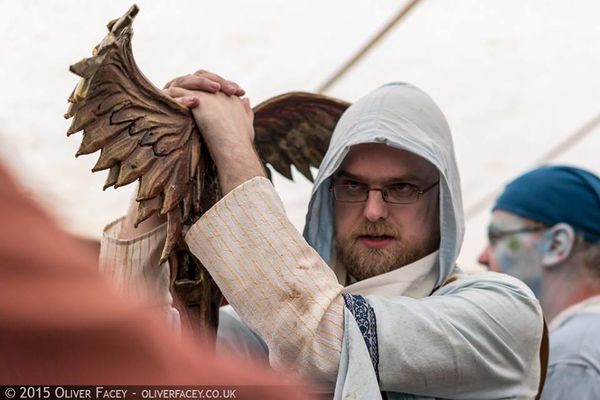 Corvus of the Spire of Auric Horizon

The Choleric Staff taps upon the power of the Realm of Summer to maximise the potential of the bearer's ritual power. These arcane implements are employed throughout the Empire to fortify the abilities of Summer ritualists.

A choleric staff is often slightly shorter and heavier than other. In the Marches, a staff of this kind is often referred to as a Soldier's Shillelagh and wielded by magicians and covens that specialise in providing warlike enchantments. Such staves are carved from gnarled oak branches inlaid with tempest jade and dragonbone sigils and shod in alloys of orichalcum and iron. Marcher battle magicians or those with an Alderman's Edge wield these staves to good effect on the battlefield supporting their yeoman allies.

It is common to see such an implement engraved with the runes of Summer or with depictions of constellations such as the Oak, the Mountain or the Stallion. A Staff of Summer Stars, as it is also known, is a favourite with Urizen and Dawnish ritual magicians who specialise in the higher magnitude rituals such as Mantle of Lordly Might or Glory to the Sovereign.

Making an artefact version of the choleric staff is a costly endeavour, but there are a handful of such items in the Empire. They are usually passed down from magician to magician within a single coven. One of the best known is the staff of the noonday sun, crafted in 172YE by Karina Matrinova Vos, a Varushkan volhov from Karov who used it to allow herself to perform Chasuble of Majesty by herself in the wilderness, as part of her self-appointed role as a defender and pilgrim of the Way. The staff has been passed from magician to magician ever since, usually within the Conclave order of the Sevenfold Path, and is said to strongly influence its wielder toward hunting and destroying cults dedicated to heretical virtues.

The staff of the Archmage of Summer is a version of the choleric staff crafted to a secret pattern, and grants twice as much power to the wielder. Unlike most such staves, the same physical staves are reforged each year; some of the staves are believed to have developed spontaneous auras as a consequence, and blamed for a certain “gung ho” attitude among the archmages of Summer.