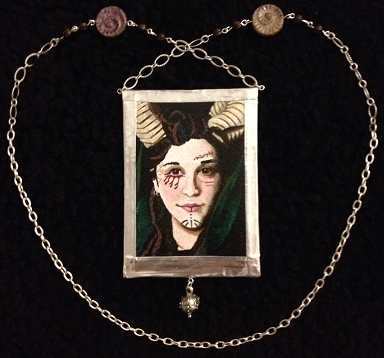 An Icon of the Devoted depicting Cora Holdfast.

Cora Holdfast was recognised as an Exemplar of Loyalty by the Loyalty Assembly, then by the General Assembly, at the Anvil Summit of the Summer Solstice 379 YE. Her friend and congregant Cerwynn Brackensong raised both judgements.

Cora was born and raised in Holdfast Steading in Therunin. Trained as a physick, she took the Brand oath to lead her steading in 377YE.

She displayed the fierce personal confidence and forceful disposition of her high Cambion lineage, modelling herself on the ideal of the leader-who-serves. Her personal brand of Loyalty was strictly pragmatic and famously no-nonsense, and her (self-professed) "meddling" knew no bounds of nation or status. In the turmoil following the death of Empress Britta, she quickly established herself as a factotum, someone who could get things done across and beyond the Anvil field.

She was involved in the founding of the Anvil Hospital & Imperial School of Medicine , where her practical disposition lent itself well to the work of triaging critically injured heroes. She served regularly there, both as a physick and the organiser of physicks, and her personal set of surgical tools - now hallowed - were passed to the hospital after her death.

Cora was also instrumental in creating the Book of Oaths, a book detailing binding promises which is kept among the members of the Loyalty Assembly.

In 377YE, Cora used True Liao to experience a vision of one of her past lives. The tale she told was one of infiltration among the subjects of the Thule, and of a powerful Loyalty to family and mission which cost her that life. When she returned, that act of Loyalty seemed to have burned itself into her soul, for her dedication had grown dramatically stronger. Some congregants were drawn to her in the aftermath of this seemingly miraculous development, and in the course of advising them, she came to believe that her place in the Great Dance was as a guide.

She served for some time as a respected member of the militia, helping bring criminals to justice - which proved somewhat ironic given the tragic events surrounding her death. Cora was murdered at Anvil - or more correctly assassinated, by some accounts. She was found dying near the Hospital, and conveyed to be with her steading and her friends. A number of testimonies were placed upon her before her death, chief among them, "Inspiring Teacher".

As a leader, an organiser, and a brand, Cora always acted as the equal of those who followed her example, and they followed her not for any rank but for the Loyalty she inspired. At her funeral were pilgrims from many Imperial nations, many of whom she had personally dedicated to Loyalty.

Cora Holdfast was pronounced an exemplar during a time when the Tribune of the Synod did not require a formal declaration of signs fulfilled, but her story shows evidence of the following signs:

An inspirational tomb dedicated to Cora Holdfast was commissioned by the Imperial Senate in Summer 381YE. Work was overseen by the Highborn magister Cadeus of the Shattered Tower, and swiftly completed. The tomb stands in High Chalcis, on Chalcis Mount. The tomb is quite extensive, and is watched over by an Imperial title: Claviger of the Basilica of Cora Holdfast.

Cora is an exemplar who inspires the faithful to get on with it. The best way to serve others is to make sure that people get what they need, whether that's a splint, seven wains of weirwood or a good sharp talking-to. Physicks may be inspired by her actions with the Anvil Hospital; leaders may be inspired by her down-to-earth attitude as a means of building bonds of Loyalty; anyone beset by trials which threaten to overwhelm them may be inspired by her example to seek help.

Cora Holdfast was a player-character in life, and as such while it is appropriate to play a character who is inspired by her story, it would be inappropriate to add any extensive background elements without discussion with Profound Decisions.