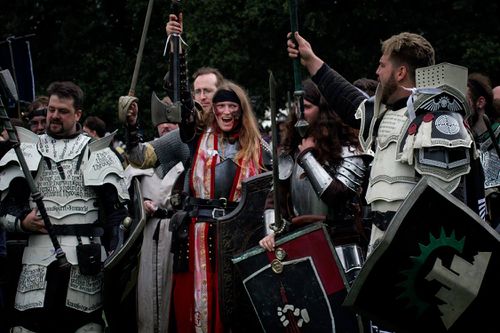 Guardians, cataphracts, and unconquered fight together to protect their nation, and to safeguard human destiny.

Highguard has a military heritage of which it is justly proud. Most Highborn serve with one of the three Highborn armies as part of their “coming-of-age”. This service is considered necessary to the formation of Highborn character and maintains the connection between the people of today and their warrior ancestry. Most skills can be put to use in a military context, although those serving as medics, quartermasters and ancillary troops do not earn as much respect as their more warlike colleagues.

Most Highborn return to their chapter after leaving the army. The most skilled soldiers become part of the elite guards that protect the chapter against barbarians and other threats. These warriors, called guardians, train daily with their comrades learning to fight as a unit in close formation. Chapters outfit their guardians with weapons and armour and most provide a surcoat adorned with the chapter’s heraldic device, usually in black and white or similarly contrasting colours. Some groups of guardians choose to specialise, training to become cataphracts or unconquered, in line with the oldest martial traditions of the Highborn.

In the earliest days of Highguard, the cataphracts rode into battle on mighty war horses, devastating their enemies with shield and lance. Today the horses are gone, but the cataphracts remain, embodying a warrior tradition that embraces the highest virtues of the Imperial Faith. Heavily armoured, they serve as living standards, encouraging and supporting those who fight alongside them with their commitment to achieving victory. The best of them burn with fervour, filling them with righteous fury when they face the enemies of the Empire in close combat. Likewise, when an army must fall back, it is the cataphracts who guard the retreat.

The counterpart to the cataphracts are the unconquered. These skilled warriors undertake scouting missions, employ sabotage and terror as weapons to weaken their foes, and seek out specific targets on a battlefield. In contrast to the archers and skirmishers of many other nations, the unconquered favour medium armour and short bows, and are not shy about engaging in close combat with hand weapons if the tides of battle make retreat-and-fire an unappealing option. 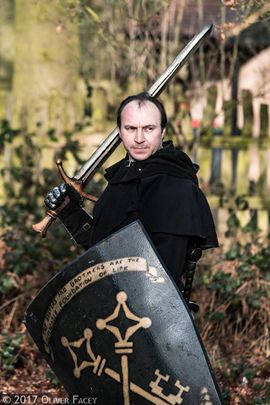 The unconquered are used to operating with a high level of autonomy, often behind enemy lines or in unknown territory. Despite this independence, the best of them know that they operate as one part of a larger plan, that their duty is to ensure that the forces they accompany achieve victory. Unconquered who arrogantly assume they can win the day all by themselves generally meet unpleasant ends.

Highborn generals and soldiers alike embrace the concept of a vigilant war. This principle teaches that strong defences and preemptive strikes are the most effective way to curtail an enemy’s ability to be an aggressor, minimising the impact on civilians, and making it the most practical and moral solution to the matter of war. On the battlefield their troops work together to utterly overwhelm their enemies as quickly as possible, cataphracts driving them from the field while the unconquered deny them any chance to regroup and counter-attack.

While the core of the Seventh Wave is heavily armoured guardians, it is supported by a number of unconquered, scouts, skirmishers and magicians. The army makes great use of mixed-arms tactics, supporting shield-and-sword with bow, or bow with polearm and pike. They are adept scouts, capable of quickly sizing up their enemies and giving clear reports on all elements of the military campaigns in which they are involved. Shortly before the Summer Solstice 383YE, the Seventh Wave became a large army.

The second Highborn General leads the Seventh Wave, and is appointed (or re-appointed) at the Autumn equinox each year.

The Valiant Pegasus is a relatively new army; recruitment was only completed in 378YE. Initially, the force incorporates some of the finest Highborn siege architects, and was well prepared both to take advantage of Imperial fortifications and bring down barbarian strongholds. Following the opportunity offered by the celebration of Empress Lisabetta, the Valiant Pegasus refocused its efforts to the preservation of life on the battlefield, supported by many apothecaries. As a new army, it has yet to establish a particular identity or reputation for itself.

The third Highborn General leads the Valiant Pegasus, and is appointed (or re-appointed) at the Spring equinox each year.

“We are the thunder on the earth, we are the steel tide that drowns the foe.”

The venerable Thundering Tide was composed of the descendants of the old Highborn light cavalry units. They adapted their mounted tactics as best they could, becoming experts in maneuverable, fluid tactics designed to outflank their opponents. Many soldiers of the Thundering Tide were trained to fight with pole-arms - an echo of the lances they once used to ride down the enemies of Highguard.

The army was disbanded by Empress Mariika as part of the sweeping changes she made in pursuit of saving the Empire from bankruptcy. The last general of the Thundering Tide, Abishai of Judah's Evasion, took his own life after. Many of the unconquered and cataphracts that used to belong to this army would go on to join the Seventh Wave.