Highguard dominates the southern Empire. Bastion is the heart of their nation, a civilised and well-settled land of wide plains dotted with well-tended woodlands. Wherever they go, the Highborn bring civilisation - even the sparsely populated forests and fields of Necropolis are liberally scattered with chapterhouses that protect the people from threats internal and external alike. Their cities lie along the length of the river Couros; from the Necropolis at the river’s mouth, past the rich and fertile fields and plains to the holy city of Bastion, and then up past High Chalcis to the very eaves of the Great Forest of Peytaht. 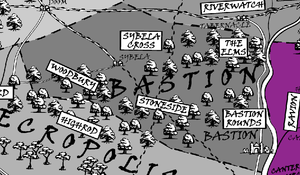 Bastion presents the calm, serene visage of the Highborn to the world. After the civil war, the White City was built on the banks of the Couros as the heart of a reborn nation.Bastion is also seen as the heart of the Way; followers all over the world look to it for guidance and it is a place of pilgrimage for the faithful. Faith, politics, and the manifest destiny of the Highborn are all bound up in the fabric of Bastion.

During the founding of the Empire, Bastion very nearly became the "official" capital of the Empire in 3YE; at the last minute the Senate decided to hold their quarterly gatherings in Anvil instead. Outside its walls, beautiful rolling plains are dotted with woodlands and carefully maintained parks. When Reikos fell to the Druj, Bastion suddenly found itself on the front lines. Many of the chapterhouses in the northern regions in particular still have a strong military aspect, although now that Reikos has been liberated this may change. 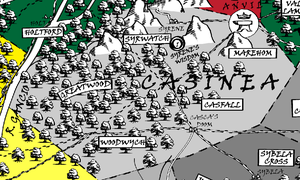 In Highguard's northwest, Casinea is an old and wealthy territory. It is the site of the town of Anvil, the political heart of the Empire. In the past Casinea was threatened by enemies both human and otherwise - only with the foundation of the Empire was peace assured. That peace is fragile, however - the vallorn of neighbouring Brocéliande stirs in its slumber, and the recent occupation of Reikos by the Druj sent a stark message of the dangers of complacency. The wealth of Casinea lies in its hills and their rich mines and quarries, and in the timber and rare materials found in its western forests. 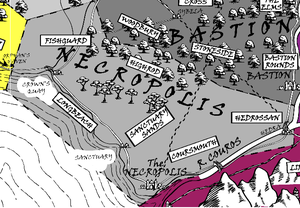 The first Highborn settled along the coast of the Bay of Catazar here, driving out the orcs to conquer the territory. They called the territory Pharos, and built a great city here to serve as their capital. That city burnt to the ground during the civil war, and was then rebuilt as a memorial to all that had been lost. Today, the great cemetery holds the mortal remains of some of the greatest Imperial citizens who ever lived - the heroes and Thrones who built the Empire and continue to defend it.

Necropolis is a land of sorrow, first and foremost. Poets wax lyrical about the sad grandeur of the landscape, but even the least sensitive sometimes have to suppress a shiver at the realisation of their own mortality. Yet the sorrow of Necropolis is tempered with the knowledge that all things pass - that sorrows teach valuable lessons, and that loss is part of life. Even the most bustling chapterhouse in Necropolis will contain some memento mori, some little touch that is ignored consciously but that subconsciously reminds them every day that people die. 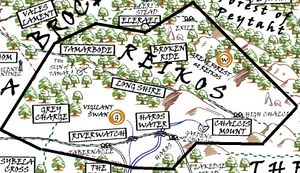 This formerly peaceful stretch of the Couros river was once known for its pleasant gardens, gentle parks, and beautiful countryside. It became wealthy thanks to the bounty of stone and wood from the Vigilant Swan and the Great Forest; herbs from the Gardens of High Chalcis; trade with Therunin and Morrow; and from the beauty that made it a favourite place for Imperial citizens from across the Empire to convalesce after illness, or to spend time away for the cares of everyday life. Then the Druj came, and after them the merciless rejuvenating power of the eternal Llofir, and the face of Reikos was changed perhaps forever.

Today Reikos is in flux. The chapters that fled are returning, those that weathered the storm are rebuilding. The parks and gardens are gone, overwritten with new forest or drowned in blood during the war and subsequent liberation. A malign miasma still clings to the hidden places where the Druj performed their abominable rites, while the desperate spirits of those who fell to their blades continue to haunt the living. Perhaps the beauty of Reikos may be restored, tempered by the knowledge of how fragile it is. Perhaps the new Reikos will be a darker place forged in bitterness and loss.

Highguard elections are only partially based on considerations of territory. The senator for each territory is decided by the National Assembly - every Highborn character with a congregation can take part regardless of their home territory - but the actual candidates are put forward by the chapters based in the territory that is being elected. As a result where you are from can still effect your ability to take part in politics.

You don't need to declare which region you live in, but it's often useful for your group to define the location of your chapterhouse for purposes of plot, and for making the game world feel more real. You might live in or near one of the established settlements, but your chapterhouse could be built anywhere in the territory - the named villages and towns are by no means the only settlements in Highguard! Your character background, or your group background, can include a few details about your home if you like, and many chapterhouses come with their own small settlement that looks to them for protection and guidance.

Each of the four territories has certain themes, which are often used as a starting point when plot writers create plot. Furthermore, certain personal resources lend themselves to certain territories better than others. These are suggestions, however, rather than hard and fast rules. In particular, the personal resources of congregation and military unit are appropriate to any of the four Highborn territories - although it's still a good idea to flavour your resource to reflect the individual character of your home territory.

Bastion is the heart of Highguard, and has themes of faith and destiny. The most important settlement is without doubt the city that shares its name with the territory - the White City of Bastion. There is something of an echo of the real-world Vatican about the White City - it is the centre of a world-wide faith after all. It's also a politically charged place - the Highborn see themselves as the shepherds of human destiny, but not everyone agrees as to where that destiny might lead.

Outside the city, this is a very civilised territory. It is widely settled, and even its woodlands tend to be reasonably safe. Bastion is not much troubled by bandits or monsters, for example. The key conflicts in Bastion are likely to come through disagreements with fellow Highborn, or with people of other nations who question the assumption that Highguard should guide the future of the Empire.

Bastion is a good place to be from if you intend to be involved in the politics of Highguard, regardless of your personal resource. The White City is full of priests, and makes an excellent place to maintain a congregation, while the chapters along the border with Reikos have had a lot of recent experience fighting the Druj and might lend themselves to an interesting background for a military unit. Farms and businesses alike make sense here, and the carefully cultivated woodlands would be an excellent site for a forest resource.

Casinea has themes of tradition and the vigilance required to protect those traditions. The most important settlement in Casinea is without doubt Anvil - the political heart of the entire Empire - which contributes to the undercurrents of conflict and suspicion in the territory. It is easy for visitors to forget that Anvil is by no means a truly Highborn settlement - and several of the chapters here look askance at the unvirtuous behaviour that takes place there during the seasonal Summits. There are deep divisions beneath the surface of Casinea - between the prosperous chapters of the east and the insular chapters of the west, as well as between the traditional, insular chapters and those who embrace the benefits of being part of the larger Empire. Historically, Casinea is where the Highborn fought other humans - the people of Dawn, the Navarr, even the Marchers on occasion.

Casinea is a good choice for chapters that are interested in sources of raw materials - especially mines but also forests. This is also a territory with a long history of trading with other nations. With the proximity of the League, the regular influx of traders and travellers heading to Anvil, and the completion of the Blood Red Roads it makes an excellent choice for a character or chapter interested in business.

Necropolis has themes of sorrow and also mystery. The Necropolis itself is the heart of the territory, and a reminder of the dangers of a lack of Vigilance can lead to. After all, the Necropolis was once Pharos - the capital of the Highborn - until it was destroyed by a civil war that grew out of corruption, indolence, and arrogance. The barriers between the living and the dead are thin here, and this means that of all the Highborn territories it is perhaps the most magical in nature. It's also where the Highborn first settled, and is steeped in history - a character who wants to explore the complex relationship between Highborn history and truth could find an appropriate home here.

The territory is sparsely settled, and has a slightly exaggerated reputation for being full of ghosts. The Necropolis itself is strongly associated with the study of Winter magic, and this is an excellent territory for a chapter that is interested in magic to be based. A magister will be right at home here, and there is plenty of space to maintain mana sites. As with Bastion it is also a good choice for a congregation. In the case of Necropolis, however, the priests have a tendency to be more practical than political in nature - their congregations are more important for allowing them access to the liao they need to practice their ceremonies than for the votes they provide in the Imperial Synod.

Reikos is about loss and new beginnings. The largest remaining settlement in Reikos is High Chalcis, but it is a shadow of its former self. For fourteen years, it was occupied by the Druj orcs - orcs known for their cruelty. The people were mercilessly dominated, enslaved, forced to work until they dropped, and slaughtered if they showed the slightest sign of rebellion. Hundreds were killed as an example, or a threat, or on a whim. The territory itself was ravaged from one end to another, ruined, and rebuilt in as a corrupt mirror of what it had once been. After the liberation, the signs of the occupation were washed away by the tide of Llofir's magic, but the scars on the souls and memories of those who experienced them first hand will not be healed so easily.

Without a doubt, Reikos is the best for for a chapter or individual interested in herbs and herb gardens. The presence of the Gardens of High Chalcis gives an immediate benefit to anyone who maintains a herb garden. Thematically Reikos was not only a place of healing but was occupied by the Druj - experts in herb lore. it is also a particularly good fit for a martial chapter - the triple threats of the Forest of Peytaht, the vallorn of Brocéliande, and the presence of Llofir in Tamarbode are all good reasons for the captains of military units to take an interest in Reikos.