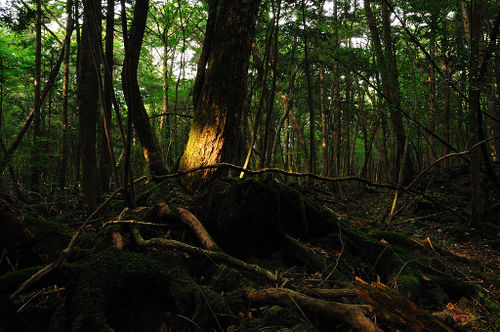 Some dark mystery lies at the heart of the forest of Peytaht.

The Great Forest of Peytaht covers Broken Ride in Reikos, and a significant part of the Barrens: Heart of Peytaht itself of course, but also the Untrod Groves and the Bleaks. Historically it covered much of the area now occupied by the Empire as well - the orcs of the Great Forest claim it once reached as far north as the mountains of Otkodov, and as far west as the kingdoms of the Jotun. The reforestation of Reikos has potentially expanded the Great Forest; it is not clear if the new growth should be considered part of Peytaht or not.

The forest is known to be rich in weirwood - the Great Forest at Reikos provides a significant bounty of this valuable material to the Empire, and its counterpart on the northern side of the forest - the Eaves of Peytaht - does the same for the Druj. In the past, the orcs of the Great Forest claimed the Eaves as some sort of sacred place; they were very keen that the recent treaty contain provision for its return to them should the Barrens be liberated.

The forest as a whole has a grim reputation. Reports stretch back hundreds of years of people entering the forest and disappearing - more than can be explained by misadventure or the dangers of the wilderness. Indeed, no major Imperial force has passed through the forest since the disappearance of the Lost Company - a force of Highborn that attempted to move through the forest in pre-Imperial times. Until the Druj came through the forest to attack Reikos in 367YE it was widely considered impossible to cross between the Barrens and Reikos via the forest. An ambitious - potentially even rash - plan was proposed in 379YE that might have allowed the Hounds of Glory and Eastern Sky to pass through Peytaht as part of the campaign against the Druj. The plan was never tested, and would have required significant amounts of liao and the support of the Imperial Synod - but if an army were desperate enough it might be possible to implement this plan or a similar one. The outcome is difficult to predict however.

What follows is an excerpt from a historical research document commissioned by the Dredgemaster of Feverwater in 379YE.

Discussion of the Great Forest of Peytaht

The forest extends north into the Barrens, where it covers many times more acres of land than the small area that is part of Reikos. It merges with vallorn haunted Brocéliande to the west, and with upper Therunin in the east. The forests of southern Semmerholm, Astolat, and Weirwater are the Dawnish remnants of the same contiguous forest. The deciduous trees of Miaren were once part of Peytaht, and when Temeschwar was built it was with ancient lumber harvested from trees that were once part of that same great forest.

Today the land covered by the actual Forest of Peytaht is much reduced… but it is still nonetheless impressive.

The Highborn woodlands are relatively safe - or at least they were before the Druj braved the heart of the great forest and launched their surprise invasion. The further north one travels, however, the more eerie and inhospitable the woods become. Beyond the northern borders of Reikos, the forest is largely untouched and there are many local tales of travellers or foolhardy entrepreneurs disappearing without a trace after pushing too far into unknown areas.

Some of those tales are recounted in the form of journals and other documents. There are many similarities – the travellers become aware of a presence watching them, along with a growing certainty that they are not welcome. Survivors of parties travelling together talk of disappearances – a man steps behind a tree to relieve himself and never returns. A woman steps out of the circle of firelight to investigate a noise and is never seen again.

In 57YE, a year after the conquest of Reikos, the Highborn sent an expedition into the woods, intending to uncover and dispel the mysteries at its heart. One hundred armed soldiers, cataphracts and unconquered supported by a coven of magisters... who simply vanished without a trace. The Lost Company are the subject of speculation and myth to this day.

Even the orcs avoided Peytaht. The forest was widely believed to be a secure border against the Druj… until 367YE when a significant Druj military force pushed through the woodlands into northern Reikos. Speculation is that they achieved this feat only with the assistance of the so-called Orcs of the Great Forest of Barrens orcs, at that time subjects of the Druj nation.

It is interesting that after the rebellion of the Great Forest Orcs, as part of the revolt that cost the Druj control of the Barrens, the Druj armies attempted to break out of Reikos not to the north but through Therunin – and again it is pure speculation but it appeared that the Druj preferred the risk of fighting an unknown number of savage Navarr defenders to the threat of travelling through the forests they had once navigated with apparent ease.

When the Druj did force their way through the Great Forest there are some discrepancies in the estimation of their forces in Reikos and what was encountered in Holberg. Even allowing for their skirmishes with the Barrens orcs en-route, it seems that the Druj lost a non-insignificant number of warriors between the isolated Highborn territory and the League city. Some even theorise that this may have helped contribute to the final defeat of the Druj forces.

What, then, has the power to both make the Druj afraid and – when they do master their fear and risk the woodlands – inflict significant casualties on a cruel barbarian military force? Sadly, we have almost no idea.

There is certainly something there, and all the evidence suggests it is not a vallorn. Indeed, there is some speculation given the position of the Great Forest between Brocéliande and Therunin that Peytaht might represent something more – something resilient enough to actually defeat efforts of the vallorn to spread into and taint the heartland of that ancient forest – despite the ease with which the vallorn devoured the entirety of the Navarr territories when disaster overtook Terunael.

If this is the case, then a key to understanding the vallorn – or something that might be turned into a a weapon against it – could lie under the eaves of the Peytaht, in the south-western Barrens. Unfortunately, whatever it is that inhabits that region of woodlands appears no more predisposed to peaceful contact with humans, or even from most orcs, than the green horror that destroyed Terunael.

As part of our research, we have collected several first-hand documents detailing experiences in Peytaht. They give some example of the fear, madness, and death that seems to attend efforts to force through Peytaht.

Yet it remains a fact that no significant Imperial military force has ever tried to pass through this dangerous region – they have invariably gone round on the rare occasions when the Empire has tried pushing into the Barrens or the Mallum from places other than Dawnguard. Perhaps a suitably protected army might be able to uncover more, were they to risk the Peytaht – there were some projections that the Dawnish armies in Reikos might be able to forge through into Murderdale to attack the Barrens forces with the use of sufficient liao to provide potent virtuous auras to the soldiers.

It is unsatisfying to admit, but the Great Forest essentially represents an enigma and one to which we have been unable to find any conclusive answer.