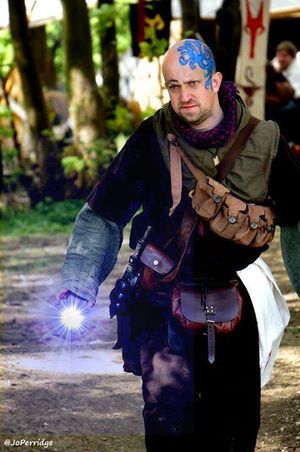 The Dredgemaster with a lightstone recovered from the lake.

The Dredgemaster of Feverwater is an Imperial title created by the Imperial Senate in Summer 377YE. At the Spring Equinox 379YE, the Imperial Senate voted to amend the powers of the Dredgemaster. In addition to expanding the operation at Feverwater, this amendment allowed the Dredgemaster to commission historical research. As a consequence, the civil service requested clarification from the Senate - as this was no longer a standard sinecure, it would not automatically be a lifetime apointment. During the Winter Solstice 381YE, the Senate voted to remove the ability to perform historical research.

Wreckage of the past

The sinecure provides four ingots of crafting materials to the Dredgemaster each season, to be used as they see fit.

The title can be held by a Navarr citizen. The Dredgemaster has tenure, and serves until they die or step down. They can be revoked by the General Assembly, the Navarr National Assembly, and by the Assembly of the Nine.

The Feverwater is a vast freshwater lake in south-eastern Therunin. The lake itself is only partially within the Empire - the eastern half in in territory claimed nominally by the Druj barbarians. The western half is used sporadically by fisherfolk, several of whom have volunteered their skills and boats to the dredging. The adventurous Navarr of Soaring Leaf steading in Eastring and the fisherfolk of Black Sails steading in East Ashes have been particularly keen to offer their assistance to this project.

The dredging uses flat-bottomed river boats and great nets which are dragged through the silt and mud that serves as the bottom of the lake, bringing up the detritus of centuries. This is quite a dangerous undertaking. The civil service referenced the swamp creatures and barbarians that live on the shores of the Feverwater when the proposal was first launched. The small camp that serves as the base for the dredging operation is a magnet for disgruntled marshwalkers and Druj raiding parties, and there have already been several deaths. The more mundane dangers of dealing with problems such as trapped nets or hidden obstacles have claimed lives as well - an especially dangerous task involves diving down to unhitch the nets when they become tangled in wreckage it needs to be unhitched manually or the entire thing abandoned to make the dark waters at the bottom of Lake Feverwater even more dangerous.

The majority of everything recovered here is rubbish, but occasionally recyclable materials are brought up along with the stinking mud and remains of past victims of the Feverwater. The shores of the lake have also been the site of regular encounters with barbarian orcs, including at least one major battle, and so it is common to bring up rusted weapons or armour along with the remnants of old boats - the thick mud at the bottom of the lake has been surprisingly effective at preserving materials that might otherwise have succumbed to the pressures of time.

The dredging operation has primarily focused on the western end of the Feverwater, but as of Autumn 378YE the first speculative forays into the wild, open waters east of Therunin are being planned.

This title is currently held by Eosffair Farwalker. This title has tenure, the occupant may hold the title until it is revoked, they die or they relinquish the position. The table to the right shows the citizens who have been elected to hold this title in the years since Empress Britta died.