Create title of High Bard of the Empire

Create title of High Bard of the Empire

I propose the creation of a new imperial position titled "High Bard of the Empire" In this first year of the reign of the Empress of Flowers the citizens of every nation have been inspired to create works of artistry and beauty, of poetry and passion, creations in word and song to celebrate our Imperium and confound the ignoble deprivations of our barbarian foes.

Yet challenge and competition spurs Pride and Ambition both and I propose we create the position of Imperial High Bard, that will be awarded annually to the imperial citizen best proving their artistic credentials before the selection of the council of nine who will cast votes to decide the recipient of this great title for the year ahead. So let each Nation contend and demonstrate the artistry of their poets and war singers in bright competition and great contention, and each year the brightest talent of the Empire will write their immortality in legacy made real in word and deed.

The High Bard will embody the artistic spirit of the Empire and should carry songs in passion and courage to embolden and encourage our soldiers and should deliver spirit-crushing feats of satire and rebuke against the Barbarian Generals and our hated foes! By these means we will demonstrate the power of artistic inspiration from all our nations to weave glorious legacy through the deeds and example of our bright imperial fellowship.

I commend this motion hereby to the attention of the Senate and invite questions there upon. 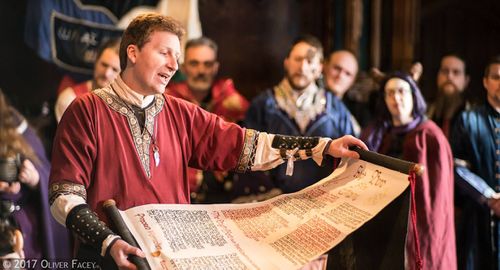 Following an administrative motion during the Spring 381YE session, the following points were made.