Crewing can be an amazing experience - but it's not for everyone - and in particular we have to make sure we have the right people who can work together and gel as a team. We're always keen to talk to anyone who is interested in crewing so that they can find out if it's something they want to do and we can see if there is a place for them on the team. So if you're interested in one of the roles below, do get in touch with our crew manager Kate Rogers - we'll give you a quick interview and see if we can offer you a place on the team.

All our crewing roles are for volunteers - but you won't need a festival ticket, we'll feed you throughout the event, and there is a big crew party on the last day for everyone who is helping take the event down. Ultimately the real benefit of crewing is that you'll be part of an amazing team of people and can take pride in your role in creating the Empire events that players love. You'll be part of the biggest LRP event crew in the country (there are over 300 of us!), working with incredibly talented people, and hopefully have an amazing time.

The crew roles described below are specific areas that we are actively looking to fill at this time, so if they sound interesting then it's definitely worth contacting us to discuss it. If you're interested in helping with something that isn't listed below then it may still be worth getting in touch, but bear in mind that we may already have enough people helping out in that area. 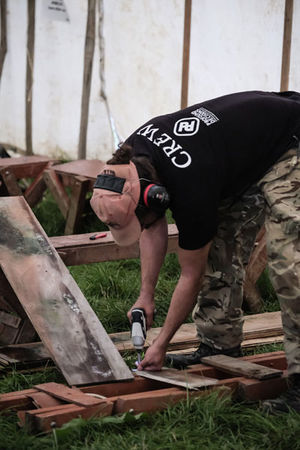 The gate crew are responsible for welcoming players to the site, checking bookings, and taking payments for the gate bookings as well as the early arrivals on Thursday. You're the first member of PD that most players will encounter when they get to site, often after a long drive, so it's important to be cheerful and friendly.

Being part of the gate crew means crewing from around noon on Thursday to Late Friday. Once your shift on Friday is complete you are then free to play the rest of the event.

How much of the event will you see?

The NPCs are there to bring the Empire setting to life and try to make each event as dramatic and engaging as possible. To do that - we need good NPCs that are capable of playing a multitude of different parts throughout a weekend. This isn’t ‘easier’ than playing - it's much harder! We need you to have a solid grasp of all the nations of the Empire, and you’ll be working with detailed briefs that may involve magic, finance, diplomacy and foreign nations. It really helps to be an experienced roleplayer and is vital that you're familiar with the setting.

You only need to be on site shortly before the event starts, and while we ask that you help with the takedown of the monster tent before leaving, this usually only takes an hour or so after time out, so being an NPC is a great role for anyone who wants to be right in the heart of the game but cannot get to the event early or stay late.

All our plot crew are very busy throughout every event. This means that it is impossible to play an event and be a member of the plot crew. You will get a chance to take a few hours off each event to get out and socialize in-character if you want to, but you can't be an NPC and play the game. We also operate a permanent crew system, so while you're welcome to resume playing in the future if you want to, but you can't switch back and forth being playing and NPCing from one event to the next.

How much of the event will you see?

As an NPC, plenty of it, but as a player, you might only get a couple of hours over the whole weekend, if there’s time. We do try and allow for people to go and socialise, but your main focus should be on your NPC roles.