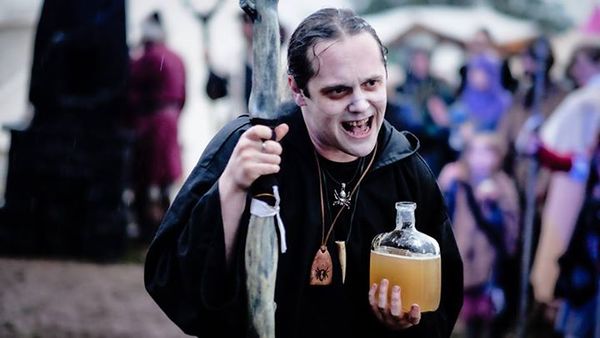 Mastery of these recipes allows an apothecary to brew preparations valuable to ritual magicians versed in the lore of Winter. With one of these potions a ritualist can wield the magic of the Winter realm more effectively, but they also become more susceptible to the ambiguous influences of that realm.

Imperial apothecaries who mastered the Decoctions of Hoarfrost were able to create the Hungry Moon and Barren Watchtower. There were always rumours about other potions with similar effects, but they were largely dismissed as simple recipe variants of these two. Following the liberation of the Highborn territory of Reikos in 379YE however, the situation changed slightly. Recipes belonging to the Druj apothecaries known as the Buruk Tepel were captured which detailed a third, expensive and difficult to brew potion referred to as Sorrow's Mask. The potion clearly built on principles familiar to apothecaries who had mastered the Decoctions, and knowledge of how to create the elixir quickly spread after the reconquest of High Chalcis. Some scholars who have studied some of the original notes point out that it appears the original Druj recipe was considerably more difficult to make - but that they were able to refine their own processes using information extracted from Imperial apothecaries captured in Reikos.

Decoction of the Hungry Moon

This black liquid has an unpleasantly oily texture, and often contains small amounts of Bladeroot or Marrowort matter as sediment that settles on the bottom of a flask. It must be shaken thoroughly before consuming. It tastes very unpleasant indeed, and while some apothecaries add sugar to the mixture, the general consensus agrees that doing so can damage the potion's effectiveness. When consumed, it cools the blood and chills the heart; by focusing a magician towards the dark emotional states it enhances the synergy between a mortal and the Winter realm.

Some Dawnish enchanters employ the decoction prior to having dealings with Winter eternals; the emotional side-effects apparently help the enchanter achieve in a mindset conducive to negotiations with these dangerous creatures. With the same reasoning, some Varushkan volhov have been known to "embrace the moon" before meeting with certain sovereigns. It is an expensive way to focus the mind, but one that has seen some success. While being possessive of allies and friends might make the magician prone to conflict with the eternal (or the sovereign), and make it hard to reach a compromise, it can be very helpful in ensuring the creature respects the negotiator even after the negotiations fail.

This gritty black elixir contains tiny pale particles in suspension, and has a dehydrating effect on the drinker. It permits a ritual magician to exert great power in the realm of Winter. It allows a ritualist to bind the powers of the realm by force of will, dominating the magic and turning it to the magician's ends.

This potent elixir was perfected by the magisters of the Circle of the Barren Watchtower, a necromantic cabal studying at the Necropolis. Following some early criticism of their use of the elixir, the noted theologian of the time, Saul, pointed out that while such a potion can create dangerous urges, it also allows mortals to demonstrate their ability to perform ritual magic using only their innate abilities - it frees them from reliance on crystallised mana. Further, he asserted that a magician who "knows" that the elixir is influencing their thoughts is in a much better position to resist that influence - and receives valuable experience dealing with other un-Virtuous urges.

This thick, oily salve uses animal fat as a base, and has a gritty, unpleasant texture full of unsettling lumps. It must be smoothed into the skin until it is completely absorbed - and where it is used it brings a deep numbness. Consequently, users often prefer to spread it on their face or chest rather than their hands of arms as performing ritual magic with no feeling in the fingers can be a daunting prospect.

As with the Decoction of Hoarfrost, the salve focuses a magician towards dark emotional states as it enhances the resonance between a mortal and the Winter realm. Unlike the weaker preparation, however, it is very easy for an inexperienced user to become so lost in feelings of sorrow and despair that they are unable to rouse themselves to contribute to the very magic they seek to enhance with this preparation. A novice user must be carefully watched to ensure they remain focused on the matter at hand rather than lost in grim remembrance of every past failure.

Interestingly, there are some references to a potion very similar to this having been in use in pre- and early-Imperial Marches and Wintermark. Allegedly, that vile preparation was made by agents of Wendigo using the fat from murdered human bodies; the Druj appear to favour human and orc fat as a base as well. Civilised magicians obviously prefer to use fat gathered from animals slaughtered for their meat - even the most pragmatic apothecary is likely to balk at the idea of killing a person purely to provide materials for a potion.