Dhomiro of the Cinnabar Hills

Dhomiro of the Cinnabar Hills

The Dhomiro of the Cinnabar Hills is an Imperial title awarded to a Freeborn citizen. It is a national position appointed through the Bourse.

The Dhomiro of the Cinnabar Hills serves as an arbitrator and mediator charged with keeping peace between the often volatile families of Kahraman. In the process, the Dhomiro encounters plenty of opportunities to trade for orichalcum from the mines of Damata; tempest jade from the quarries of the Jade Range. and beggar's lye gathered from the beggarwood forests above Gambit.

Some Dhomiro take their title very seriously, and spend their spare months actively travelling through Kahraman looking for opportunities to improve the lot of the Freeborn who live there. Others leave the job to agents - reaping the rewards of their position by proxy.

Prior to the popular change prompted by the Brass Coast National Assembly, only those captains of fleets that had engaged in privateering during the previous year could vote for the Dhomiro of the Cinnabar Hills. This changed shortly before the Spring Equinox 383YE and now every captain of a fleet in the Brass Coast has a say in who will hold the title.

There is a tacit expectation that the Dhomiro of the Cinnabar Hills will help ensure the economic stability of Kahraman - and where possible help increase the prosperity of the mine owners and artisans that make the hills their home. In practice, they are rarely called on to intervene directly but it is not unknown for inhabitants of Kahraman having purely economic problems to bring them to the Dhomiro before they bother a senator with them - even where the title holder is not themselves a Kahraman native it is assumed they have sufficient self-interest to remain concerned about the general economic welfare of the hill dwellers.

On occasion, the Dhomiro may be asked to help out with problems concerning the Great Mine of Briante or the Damatian Cliffs, especially where those problems have arisen from conflict between the Freeborn and the individual who holds the Imperial Bourse seat. Some politically astute Dhomiro of the Cinnabar Hills have invested the wealth they accrue from their title towards placing trusted family members in control of those valuable seats on the Imperial Bourse.

As a ministry, the title of Dhomiro of the Cinnabar Hills allows the holder to purchase quantities of special materials at a set price. The Dhomiro spends their decision about how much money to spend during downtime from their character page. Money is removed from, and resources are placed into, the character's inventory when the downtime is processed.

This title is appointed during the Autumn Equinox. The Dhomiro of the Cinnabar Hills is appointed by citizens of the Brass Coast who control fleet personal resources. The voting is handled by the civil servants in the Bourse. 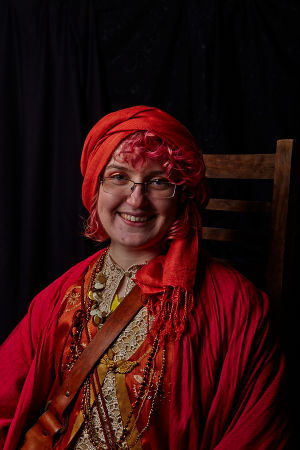 Estrell of Feroz, a former Dhomiro of the Cinnabar Hills

Only a Brass Coast character may hold the title. They do not receive a seat on the Bourse. As a title appointed through the Bourse, they cannot be revoked by the Imperial Synod.

This title is currently held by Aurélio i Valiente i Erigo; it will be reelected at Autumn Equinox 384YE. The table to the right shows the citizens who have been elected to hold this title in the years since Empress Britta died.