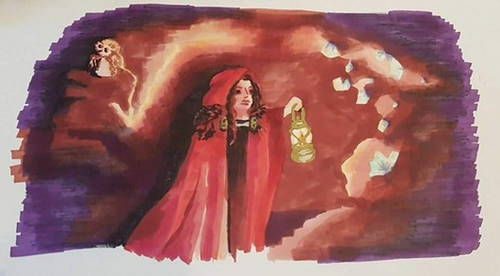 Being inside the cave has been likened to being inside a living heart.

The Fallsheart Guardian is a Wintermark Imperial title commissioned by the announcement of Breeta Dunning a bearer of an Imperial Wayleave, in Autumn 381YE. The position of Guardian is a sinecure, requiring minimal responsibility but offering a regular income of crystal mana.

The Guardian has no particular responsibilities; they simply receive a bounty of crystal mana from the Fallsheart Cave in Hahnmark. If the cave were to be threatened in any way, it would be the responsibility of the Guardian to deal with those threats.

The Fallsheart Guardian gains custodianship of a sinecure. They receive an income of 9 crystal mana each season.

The title can be held by a Wintermark citizen. The Guardian has tenure, and serves until they die or step down. They can be revoked by the General Assembly, the Wintermark National Assembly, and by the Assembly of the Nine.

This dark cavern on the edge of the sinkhole in Hahnmark was discovered entirely by chance during a particularly heavy thunderstorm. The cave is almost spherical, like a massive naturally occurring geode, but among the naturally occurring minerals are rich crystal mana deposits. Naturally warm, and with a distinct rose hue to the crystals, being inside the cave has been likened to being inside a living heart - thus the name.

“Aye, it’s safe” Axhind had assured her before she set out from the new market town back to the old mana site.

It was unusually warm for so late in the Autumn and the going was pleasant. She quickly left human activity behind, the threat from the trogoni had caused most of the forestry trades to migrate elsewhere. The sheer upheaval of geography had broken the land, paths and trails were rent, fissures had to be crossed or circumnavigated. Breeta was determined to learn the fate of her mana site, it had been tended by her direct family for generations. Clouds rolled in, the woods felt closer, darker, broken trees made the going tough until she stumbled upon the path Axhind’s patrols had cut through the ruined forest.

Eventually the forest suddenly ended as the land just dropped away. The trail down wasn’t difficult, the near diagonal slope and layers of freshly exposed stone almost formed natural stairs, and she was quickly into an eerily unspoiled forest on this new plateau. She recognised these woods and soon found the entrance to the site. It was not dark inside - glow crystals cast a pure, constant light throughout. Ornately carved wooden beams supported the cavern, runes of Verys, Cavul, Pallas, and Feresh repeated endlessly on these great supports. Others sported carvings of creatures, beasts mundane, magical and mystical, some simply left initials and names, many lost even to the scops. Items had been left as personal mementos, old metal tools, dried flowers, ivory carvings, her sea shell owl stood watch as always. The crystals had grown well from the tiny veins, she collected a number that had matured. She saw it as art, a mana site should be carefully tended, like cutting flowers from a garden rather than harvesting a field of wheat.

Outside fat drops of rain now rolled off the leaves of the forest canopy. Soon a true Wintermark storm had begun hammer down onto the land. Unbothered she made her way back to the slope but cascades of brown water washed down its face, silt and scree rolled down from above making the path up impassable. The flow at the bottom seemed to head south so she headed north hoping that eventually the plateau would rise to meet the surrounding land. As the storm really whipped up, mudslides made following the cliff face too dangerous, she found an abandoned cabin to wait out the storm.

In the morning the forest was fresh and bright again, birds sang, drops of water still pattered down, a memory of the storm before. Despite a small landslide, the original route down had survived the storm and was now dry enough to trek up. She began climbing but something caught her eye, a distinctive glowing glint in the sediment from the storm. Working over to the newly exposed rock there was a tunnel here with its own illumination spilling out. The glow became ever brighter as she carefully crawled negotiated the passageway towards the centre. It was like crawling into the heart of a magnificent radiant geode. Bright mana flowed, waved and danced, lapping around likes a borealis in all directions in the crystals. It was almost a tragedy to spoil this natural wonder but such a boon was too much to let waste.

This title is currently held by Breeta. This title has tenure, the occupant may hold the title until it is revoked, they die or they relinquish the position. The table to the right shows the citizens who have been elected to hold this title in the years since Empress Britta died.