A Furrowed Wake is a stout wooden stick, reinforced and inlaid with tempest jade decorations. It allows a skilled magician to twist their magic to throw a target to the ground rather than simply holding them in place. In many ways, this is a superior method of capturing an opponent to the more traditional entangle spell.

Imperial Orc warcasters favour this staff because it allows them to get up close and personal with their opponents - and place them at a disadvantage at the same time - without them running away. When using the Furrowed Wake they can often hear the voice of an ancestor screamingly urging them to brutalise their enemy as they are on the ground, calling it the Stave of Antecedent Might. It is also useful for Thief-takers when a group of polearm wielders contains a few warcasters and their tactic involves knocking their quarry to the ground. It allows the warcasters to be part of the disciplined strategy. 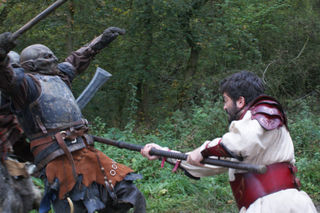 There is debate among nations about which rune this staff should be marked with. Among the Navarr, Winterfolk and Varushkans Mawrig, the rune of storms, is used, for the ability to surprise and bring down the weak. However in Highguard, the League and Urizen Mawrig represents disaster and is seen as a particularly ill omen. They instead prefer to mark their Furrowed Wakes with Xun, rune of transformations, representing the transition from the magical to the physical. For this reason in Urizen it is often decorated with iridescent butterfly wings gaining attacks with it the sobriquet Butterfly Wing Storm.

"And so we see that while it is quite easy to weave force THUS!", she muttered a word, reached out a hand and wound one of her two already-bruised acolytes with barely visible chains of force. She drew forth a small rod from her robes and touched it to the other acolyte, "We must still always be prepared for the relatively simple matter of adjusting that force to act in a crucially different way." She spoke a word of power again, and the other acolyte's legs where whipped from under him, toppling him onto the hard cobbles of the training yard. "Here ends today's lessons."

"It is our honour to learn at your feet, mistress", the two acolytes wheezed in unison.