The Healer of Dawn is an Imperial title created by the Dawnish Civilian Commissioner in Spring 380YE in order to supervise the Garden of Tiberius' Bequest in Laroc, Astolat. The position was created to help ensure that the best healers of Dawn had access to the vital herbs they need to carry out their duties - an essential ingredient for them to pursue glory.

Construction of the Garden of Tiberius' Bequest was completed shortly before the 380YE Summer Solstice. The garden was planted to testify to the skill and bravery of the Dawnish healers, and the many ballads that would not have been sung if not for their actions. The gardens are tended by the same hands who tend those injured in the great tourneys.

The healer of Dawn is expected to distribute the herbs they receive among healers of Dawn that they consider worthy, in order to promote this path to glory. Most citizens who think of Dawnish glory imagine lines of brave knights clad in shimmering mail or bold war witches wreathed in mystic armour. But there are many paths to glory, the troubadour whose songs move the hearts of any who hear them perform, the smith who creates the finest weapons, enchanters whose guiles outwit the eternals. For a healer to achieve glory in the eyes of all is hard - for little of their work is seen; it is the responsibility of the Healer of Dawn to help the brilliant few whose arts serve all to shine as brightly as the warriors whose lives they save.

Bounty of the Garden

The Healer of Dawn has custodianship of a sinecure. They receive an income of herbs each season: 18 drams of Cerulean Mazzarine. 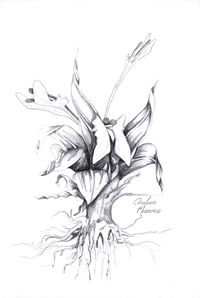 Cerulean Mazzarine flourishes in the warm climate of Astolat.

The title can be held by a citizen of Dawn. The Healer has tenure, and serves until they die or step down. They can be revoked by the General Assembly, the Dawn National Assembly, and by the Assembly of the Nine.

The garden lies just within earshot of the fabled tournament grounds of Laroc in Astolat. Located on the crest of a low hill, a visitor walking through the entrance will pass three statues and seven empty plinths. The three statues depict Doctor Tiberius of Urizen, Isabella de Rondell of Dawn, and Peter Vorsh of Dawn. The other plinths were left empty in order to goad the physicks, chirurgeons and apothecaries of Dawn to even greater deeds.

The garden has, in addition to herbs cultivated throughout the empire, a dazzling array of beautiful flowers which are often used as favours during the tournaments held nearby. In the centre of the gardens lies a Spring Regio, first discovered following the use of the Hallow of the Green World in the Spring of 380YE.

This title is currently held by Isabella de Rondell. This title has tenure, the occupant may hold the title until it is revoked, they die or they relinquish the position. The table to the right shows the citizens who have been elected to hold this title in the years since Empress Britta died.