The Rose Towers are a singular marvel, marrying functional fortification with beauty and inspiration to create a place of pilgrimage testifying to Pride in Dawn’s contributions to the glory of the Empire. They were designed by Lord Caradoc of House Arien once held a reputation as one of Dawn's finest architects before he retired to live out his days at Semmer's Rose. The construction that made him famous was designed and built as his test of mettle, a commission from the Earl of House Arien to create a beautiful palace in which every room would contain at least one window that faced the south garden. Although over eighty now, the Lord has worked tirelessly to create a design for a new tower to be constructed at Lacuve, building on the minor fortifications constructed near the town of Lacre.

The project was commissioned by Sandro Visconti di Sarvos as the Bearer of an Imperial Wayleave, and funded wholly by Imperatrix Lisabetta, as the Queen of Dawn. Construction of the Towers was completed shortly before the 382YE Summer Solstice.

The Imperial title of the Queen’s Rose has custodianship of this place of pilgrimage.

A Portion of Liao

The Queen’s Rose is an Imperial title that has custodianship of this sinecure, which provides an income of twelve measures of liao each season, to be used as the holder sees fit.

The Queen’s Rose may sit in the Imperial Synod, and possesses 24 votes in Synod affairs (or an additional 24 votes if they already have a congregation). They may use these votes in any assembly for which they are eligible.

The title is appointed each Summer by the Throne.

Only a Dawnish citizen may be appointed as the Queen’s Rose. The Queen’s Rose can be revoked by the General Assembly, the Dawn National Assembly. or the Assembly of the Nine.

The Rose Towers stand in the region of Lacuve in Semmerholm, in the rugged terrain abovethe town of Lacre leading down towards the border with Semmer’s Rose in Causse.

These were originally constructed as watchtowers in the rugged landscape between the Dawnish towns of Lacre and Semmer’s Rose, to guard against the presence of foes such as orc raiders from the Barrens and monsters out of the deep woods, and have also served as secure bases of operation for Questing Knights hunting the interlopers.

Each tower will contain countervailing stairs laid out so that it is possible to ascend by one stair well and then descend by the other. The walls will then decorated with a set of tapestries, each depicting scenes of Dawnish triumph from the recent Semmerholm campaign. In this way, a hearty individual strong enough to climb and descend each tower in turn might revisit the story of the entire campaign in the course of their journey. 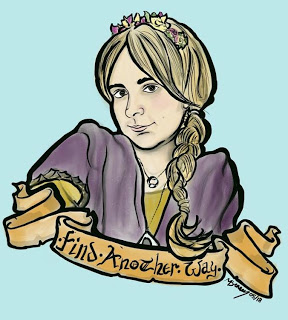 In each central tower cavity, an ingenious Holberg-designed rising platform has been installed to ensure that any citizen, regardless of physical capability, may make pilgrimage to this important structure. Doughty yeofolk are employed at the Towers to haul on the ropes; further assist citizens who might face challenges with the many stairs; and to tell of the history of each of the richly coloured tapestries hung upon the Towers’ interior walls.

Each upward journey depicts Dawnish contributions to the Empire, both cultural and martial, in a variety of styles sourced from the other nations of the Empire. One tableau shows children taking the Imperial citizenship test created by the Dawnish. Others show King Rodric’s abdication of his throne to pass his Test of Ardour; Dawnish troubadours founding the Three Refrains sodality of bards; heroes of the Hounds of Glory fighting alongside Freeborn in the Liberation of Segura in 377YE; the recapture of Karsk by Dawnish and Wintermark forces; the courage of ‘Nightripper’s Bane’ Ser Isobel of Astolat; Dawnish war witches of the Eastern Sky aiding Unconquered and Navarr scouts to recover the recipe for Firewine; and Dawnish hosts who fight to liberate the Empress’s own city of Holberg.

At the foot of the central tower a brass plaque commemorates the successful collaboration between the Wayleave Holder Sandro Visconti di Sarvos and the architect. Nearby, a prominent tapestry shows a scene from Empress Lisabetta’s past life vision: Earl Nimue de Gauvain is girded in front of a long mirror, before she leads the Golden Sun to fight in Miaren alongside armies from the Marches and the League.

At the very top of the highest arch of the central tower, a great circular stained glass window catches the light from the rising sun each morning. At its centre, the ‘Rose Window’ depicts Lady Jocelyn Cordraco, the Senator for Semmerholm who was murdered in mysterious circumstances at the Winter Solstice of 381YE. The motto underneath her portrait in this great window reads ‘Find Another Way’.

This title is currently held by Catalina Novarion; it will be reelected at Summer Solstice 384YE. The table to the right shows the citizens who have been elected to hold this title in the years since Empress Britta died.