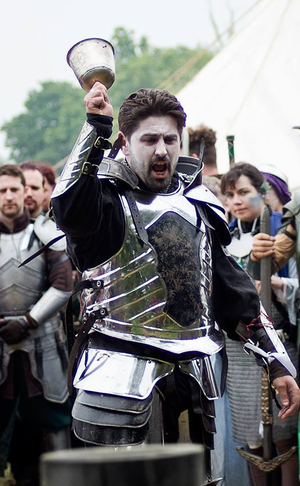 A silent bell is rarely a melodious instrumentsfor creating music -
it is a weapon for expelling malign spiritual presences.

This valuable item of priestly regalia is generally crafted in the form of a bell, gong, or chime. In some places, especially Wintermark and The Brass Coast it may be made in the form of a small drum, or even a rattle. Despite the name, it is usually quite capable of making a noise - its common name comes from the idea that the bell is experienced on a spiritual level as well as a gross, physical level. Unlike the musical instruments that many priests use, a Silent Bell is rarely a melodious tool for creating music. It is commonly for creating a discordant racket, intended to drive away malign spirits and corrupting influences.

The Silent Bell allows a lone priest, or a small group of priests, to tackle powerful curses and evil spirits that might otherwise overpower them. It is almost always hallowed with an aura that provides Courage or Vigilance in the face of spiritual corruption, even when it is intended to be wielded by a priest dedicated to a specific Virtue.

Stories from the Marches tell of a particular Silent Bell that is widely believed to be an artefact - or possibly even a blessed relic. Brian of Heathford, the husband of a farmer from the village of the same name, was a renowned cook well known for his Vigilance and Wisdom. When local gossip suggested that the misfortunes tormenting his fellow villagers were caused by the wicked spirit of a dead sorcerer, he marched down to the spirit's haunt - a burnt out mill - and lead his neighbours in a three-day long chorus of the rough music. In the end, despite its best efforts, the ghost was sent howling back into the Labyrinth, but the stout ladle that Brian used to beat on his cook-pot for three solid days and nights without sleeping, eating, drinking, or breaking his dissonant rhythm, was handed down to his children for several generations before being entrusted to the Threshers of Upwold. According to the writings of Ander Thresher in 250YE, it still possessed a potent ability to aid the ceremony of exorcism and was imbued with a "singular aura". Sadly the item was lost to the Empire in 290YE during an altercation with a coven of Wendigo-inspired sorcerers threatening King's Stoke. Both the Assembly of Vigilance and the Threshers of Upwold would be keen to see the item recovered and put to good use, in the event that it is still in existence.