The lands of the Urizen are predominantly mountainous in nature, for they favour the heights and summits of hills and mountains as sites to construct their spires. The territories are sparsely populated, and those populations tend to be widely spaced out. A network of well maintained roads and bridges connect the spires, but the wilderness between them is largely given over to bandit orcs, brigands, and peculiar monsters. 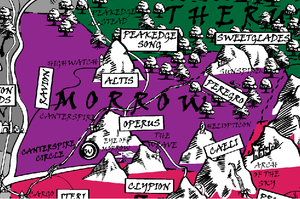 The spires of Morrow are amongst the oldest in Urizen, dating back to the nation's birth. The heart of the Heliopticon is here, making it a centre of communication for the Nation. The miracle of the Heliopticon is administered from this territory, and most spires maintain a series of prisms, lenses and mirrors atop their tallest roof in order to pass on the flickering messages that keep the nation in constant communication. Many spires in Morrow inhabit some of the original buildings discovered on the mountaintops by the first Urizen to ascend the mountains. Large open buildings, with doorways and halls just larger than a human might need, they create a sense of open space that has set the pattern for all Urizen architecture. Despite its great age Morrow moves inexorably forward, and many of its spires are undergoing constant reconstruction and improvement. It is said that “no two days find the same Morrow” as the Urizen constantly strive to perfect their land even further. A project may take a decade or even more to come to fruition, but the Urizen pride themselves on vision and their desire to perfect their world. 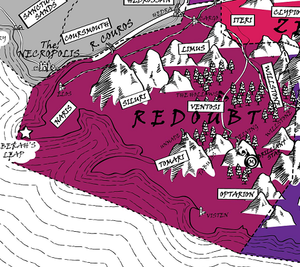 Smallest of the three Urizen territories and the wildest, the spaces between the spires are haunted by bandit orcs and dangerous beasts. The mountains here are riddled with odd star-shaped tunnels that date back thousands of years, long before there were any reliable records of humans in this part of the world. There is a strong martial tradition, and many citadels, including the great Court of the Fountain that watches the eastern approaches against the barbarians who occupy Spiral. The territory has a long coastline, and while it is not easily passable for much of its length, there are several spires on the Bay of Catazar that look outwards to the wider world - both to their allies in the Empire, and to distant lands full of strange philosophies. 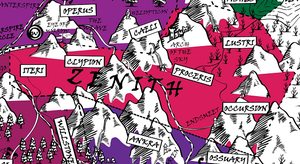 Lost in 382YE to the Druj. The mountains of Zenith are the tallest in the nation, and perhaps the Empire, and the air here is still and cold. The spires tend towards the contemplative, the night sky is rarely concealed by clouds making the territory perfect for stargazers. Many religious thinkers and philosophers also reside in Zenith, where they claim that the rarefied air helps them maintain a sense of detachment and clarity. Zenith is well known for its abundant magical auras and many spires have experimented with arrays of metal mirrors that focus the light of the sun into internal chambers to try enhance the production of magical crystals. Zenith also has some of the most beautiful waterfalls in the Nation, with apparently bottomless mountain lakes providing succulent fish to supplement the diet of the inhabitants. 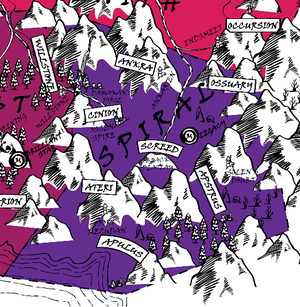 Lost in 331YE, Liberated and re-conquered by the Grendel several times The Urizen lived in Spiral long before there was an Empire, but even then it was isolated. The main thrust of pre-Imperial Urizen settlement was in Morrow to the north, and the two territories were connected by a tenuous "bridge" of spires stretching across Zenith. Even then, the place had a haunted reputation. At some point in the distant past, powerful magic was worked here and the echoes of that magic occasionally caused trouble for the Urizen in their mountain fastnesses. At the heart of the territory is the Black Plateau, great plateau of volcanic glass with a dire reputation. Artefacts from the Black Plateau are often considered haunted or touched by malign evil, and are generally destroyed when they are encountered.

The territory has been often contested by the Grendel orcs from the Broken Shore to the south - and in 381YE they succeeded in conquering it. The Empire and the Grendel have waged war back and forth across the territory for decades, with the war heating up in the last five years or so. The territory has been liberated once, then lost again as the battle-lines shift. Many of the spires have been looted, their wonders stolen by the orcs, their people carried away in chains to serve as slaves. And always, as the fighting continues, the Black Plateau grumbles and rumbles in its uneasy slumber.