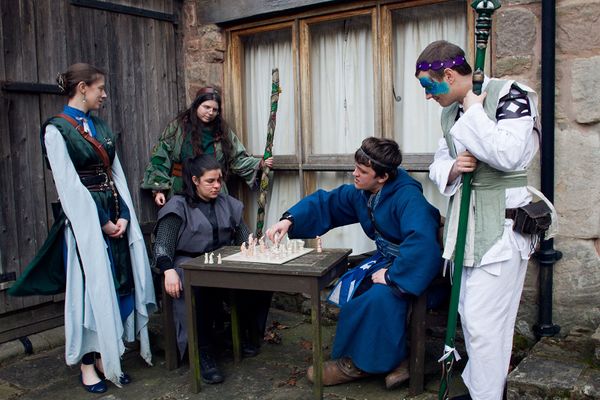 An ambitious people with a desire for order in all things.

The Urizen live in the mountains in settlements called spires: clusters of buildings, halls, galleries, and balconies that are carved into a hilltop or the side of a mountain peak. Spires tend to specialise: a given spire might be known for its fine craftsmanship, the beauty and artistry of its musicians, its dedication to martial affairs, or its mastery of one or more spheres of magical power.

These majestic peaks have shaped Urizen society. They are defensible, but can only support a small population. As a result, Urizen is the smallest nation in terms of population, although its numbers have been slowly increasing since it joined the Empire. The small size gives every person a clear sense of their own importance and their place in the community. The Urizen philosophers claim that the high peaks allow them to maintain a sense of perspective on the world, giving them a physical distance from the turmoil of day-to-day life in the Empire that allows them to be able to consider problems dispassionately.

The Urizen prize rationality and learning above all other qualities. They favour an ordered approach to life and their culture is shaped by the philosophies and ideals they have embraced. They are an ambitious people with a desire for perfection in all things and most Urizen spend what time they can in study, contemplation, and practice. Scholars and philosophers are prominent, but magic is considered the highest discipline of all in Urizen and their most prominent citizens are usually powerful mages.

Urizen love to see practical applications of knowledge, lore, and philosophy. While learning for its own sake is laudable, the Urizen value much more highly knowledge that is used to create tangible benefit — to change the world, even in a small way. They are credited with creating whole branches of natural philosophy and mathematics, formalising and codifying ideas such as algebra, geometry, and trigonometry. They are most proud of practical inventions such as the telescope, or the many magical rituals they have created. They apply their learning to make their lives more comfortable and fulfilling, and strive for the ideal of achieving something elegantly and with the least expenditure of effort.

All people by nature desire knowledge.

Urizen aspires to a sense of timeless tranquillity. They seek to cultivate serenity and calm in themselves and in their environment. Most Urizen live a structured life that provides a foundation for them to build their identities around. They are not moribund or calcified, but disruption of the personal daily routine is a clear sign that there are problems that demand their attention.

A desire for order and perfection in all things is what drives most Urizen. They seek mastery of the self, often through philosophies such as arete and poise, and they employ the teachings of the Net of the Heavens to make the world around them flawless and sublime. Most strive to move the Empire towards a utopia. While different spires disagree on what constitutes the perfect society, they broadly agree it should involve the largest amount of happiness for the largest number of people.

The archetypal Urizen is an educated person who applies their learning and discipline to every part of their life. An individual Urizen might easily be an implacable blade-master, oratorical reformer, dedicated natural philosopher, wise theologian or powerful magician. Wherever possible, they seek to expand their understanding of the world and their role within it, and apply that understanding to achieve their goals.

There are magicians, priests, warriors, and traders of every stripe in every nation in the Empire. An archetype represents a specific attitude or approach to a given role that reflects cultural values and common ambitions of a nation. Choosing an archetype helps to define your character; it provides roleplaying hooks and ready-made character goals, but it also places demands on your character in terms of how you portray them. Selecting an archetype is optional, and it's better not to pick one if none of them appeal to you.

Urizen is a nation of magicians, and the average citizen aspires to master magic if they can. Among the most accomplished magicians there are several identifiable roles that citizens gravitate to. Stargazers are scholars of magical lore who possess a deep and powerful love of magic in all its forms. Even the most cerebral stargazer is excited by magic - exuberant in their desire not just to perform it, but to deepen their understanding of it. They push the boundaries of magic, seeking out new understanding, uncovering new secrets, and performing new rituals that have never been cast before.

In contrast, both seers and magi see magic as a tool with which to achieve a higher goal. Seers believe that perfect understanding is the key to unlocking the Net of the Heavens. Seers strive to direct the future by discovering everything they can about the world, especially through magical means, and sharing that information with those they believe can use it best. The mages (or magi) are the political magicians of Urizen. They see the application of magic as fundamentally political in nature, something that can be used to change the world for the better, but only when used wisely. They use their magical abilities to help their allies to try to build webs of favour and influence.

Although Urizen is famed for its magicians, it is also a nation of philosophers. In Urizen priests who use their understanding of the Net of the Heavens to perfect the world are called illuminates. Unlike many other Imperial priests, their focus is on trying to enable virtuous citizens to gain power in the Empire, preferably at the expense of those whose actions demonstrate a lack of virtue. By contrast a questor is any Urizeni priest who wishes to perfect the Doctrines of the Faith. They pursue deep philosophical questions searching for new insights into moral philosophy, the mind of the creator and the telos or purpose of life. Rather than guide the actions of others, they prefer to use probing questions to encourage their congregations to seek their own conclusions.

Urizen is threatened by the Druj to the east and by the Grendel to the south. For defence it relies on the dedication of its sentinels, who embrace the arts of war with the same passion and commitment that their fellow Urizeni study magic. A respected sentinel is much more than just a skilled warrior - they are expected to study strategy, tactics, logistics, history, magic, and diplomacy. Anything that might influence the outcome of a battle falls within the domain of the sentinel. Their great rivals are the sword scholars, warrior priests with a passionate dedication to wisdom and reason. They exhort the virtuous to test what they learn, and oppose the Imperial Synod because they believe that obedience to a higher authority stifles virtue. They challenge anyone who presents claims of revelation, rejecting everything that is not founded in logic and evidence.

For leadership, Urizen looks to it's arbiters. Arbiters are civic-minded administrators chosen to lead the spires, citadels, and temples of Urizen by their fellows. They are focussed on ensuring the good of their spire, their territory, and their nation, usually in that order. Committed to the wellbeing of their community, arbiters are the backbone of Urizen, collectively striving to ensure the safety and prosperity of all. If you are part of a group then it is good idea to create your own spire and choose one among you to be your arbiter.

Few people in Urizen are motivated by money for its own sake but architects are interested in economics and fascinated by the way that money moves around and influences the world. Much more than mere traders, they see money as a powerful tool for influencing people and changing society for the better. Through investment and mercantile activity they seek to change the world around them.

One of the most famous Urizen archetype is the torchbearer. Magician, priest or warrior, anyone who has a commitment to the truth can be a torchbearer. They strive to keep their fellow citizens informed about current events, but they also delve into the past to make sure that the Empire is built on solid foundations. They dislike falsehood and secrets, especially political secrets, and regularly clash with those who value a palatable lie over a painful truth as well as those with something to hide.

Urizen names are inspired by Roman and Byzantine names. They do not use the classical Roman three part name, and comic pidgin Latin should not be used, but the classical roots give a single name the right air of timelessness.

Formally, all Urizen append the name of their spire to their title. Spires are small enough that the occupants can avoid naming children with names used by other living residents of the spire, so the Urizen have no need of family names. If two Urizen with the same name do end up living in the same spire then one or both of them are usually given an appropriate epithet by the peers, e.g. "Portia the younger". 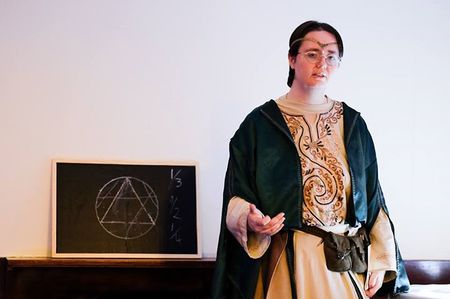 Philosophers and teachers who favour an ordered approach to life.

Spire names tend to be in English, and are usually descriptive. For example; Evenspire, White Marble Temple, Citadel of the Immaculates.